Amazon isn’t quite pulling the plug on Crucible, but it is making a drastic move on its path toward reviving the team-based shooter. Starting tomorrow, July 1, at 9 a.m. Pacific time, Crucible will move back into “closed beta.” This is coming after the game already released on Steam. Put as simply as possible, this means Amazon will no longer have the game up for new players to download (it’s a free-to-play game). But if you already added it to your library, you can continue to access it without interruption.

In a blog post on the Crucible website, Amazon says that most things won’t change if you’re an active player. But if you want to play with anyone else, they’ll need to add it to their library now.

“If you’ve got friends who want to be part of the Crucible beta, you can encourage them to get the game before tomorrow morning,” reads the blog post. “In the near future, newly interested folks will be able to sign up through playcrucible.com.”

But one of the major problems with Crucible is that it doesn’t exactly have a lot of active players. 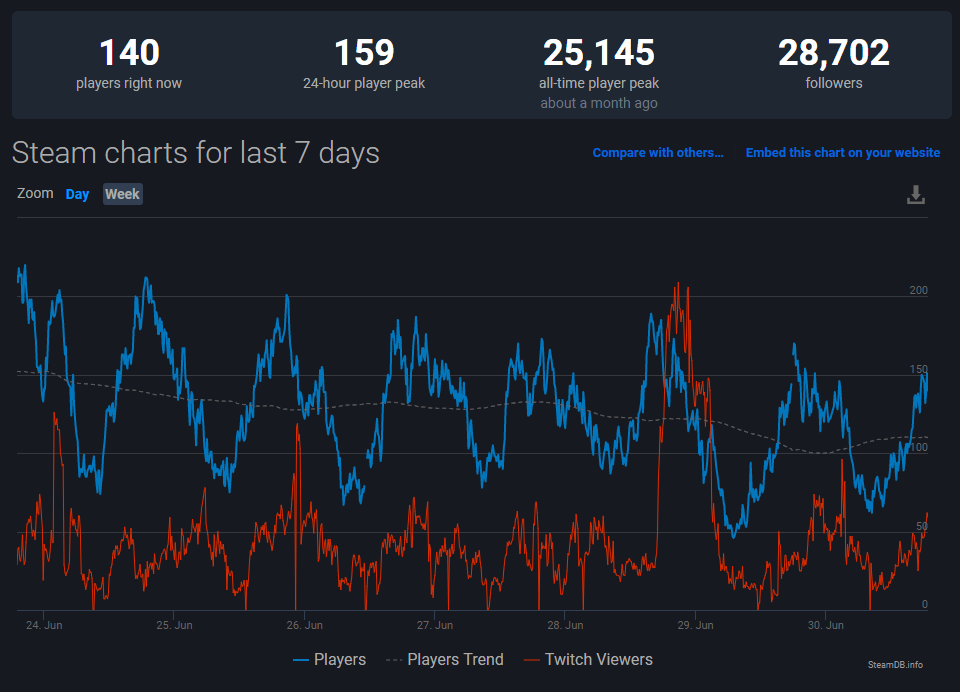 Above: Crucible’s audience has vanished on Steam.

Crucible hit a peak of only 159 concurrent players over the last 24 hours. That is down from 25,145 concurrents at its peak a month ago.

As it stands today, Crucible seems destined to join Boss Key’s shooter Lawbreakers and Valve’s Artifact as one of gaming’s biggest flops in recent years.

If anyone knew exactly why one game succeeds and another doesn’t, they would likely be an extremely wealthy consultant or publishing executive. But you can look to a number of factors for some insight here.

Crucible came out at a tough time. It essentially went head-to-head with Riot’s Valorant, which had a ton of built-in interest as the next big game from the League of Legends studio. But Riot also pumped up the marketing for Valorant by paying streamers to play the game for their massive audiences. Crucible did not have the same level of external support.

Amazon also doesn’t have a history in gaming. The company has spent a lot of money in the space. It has acquired talent and studios. But all it has to show for it — in terms of consumer products — is the disappointing Grand Tour racing game based on the company’s Prime Video show.

Making games is hard. It’s so hard that a companies like Google and Amazon cannot just waltz in with stacks of cash and find immediate success. Ubisoft has 15,000 employees all dedicated to making about a dozen or so video games. Amazon hasn’t shown that it’s willing to dedicate those kinds of resources to its gaming products yet. And that likely means that it’s going to continue failing when it comes to this market.