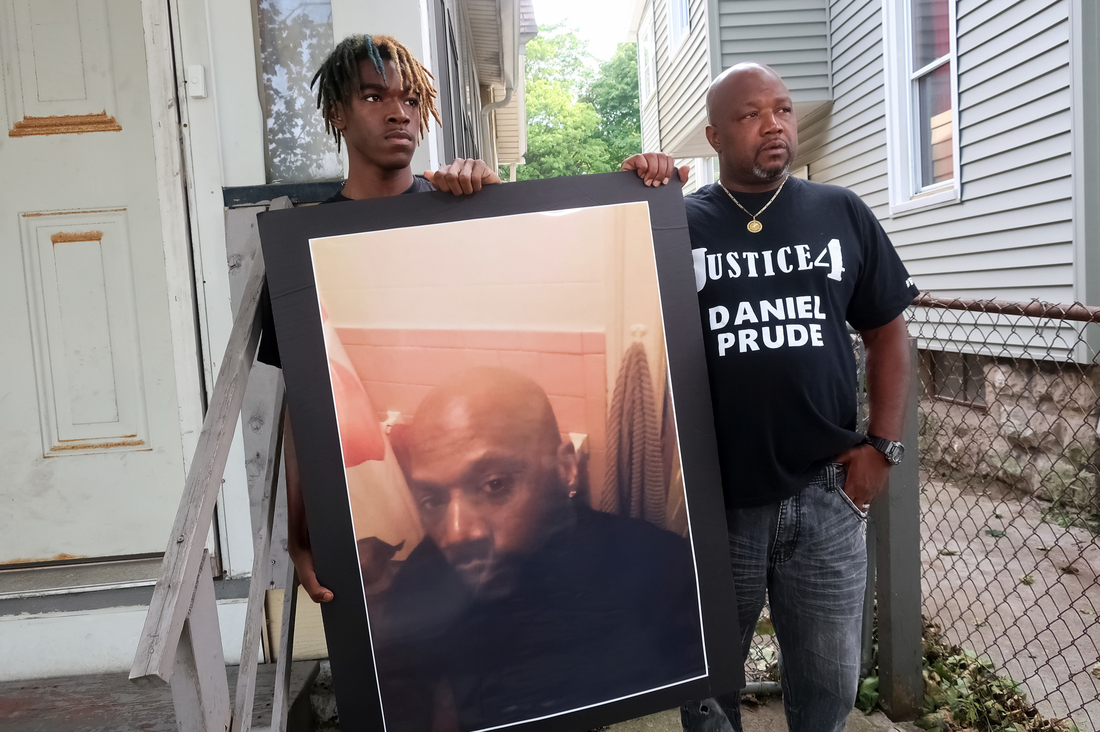 Family members Armin Prude (left) and Joe Prude stand with a picture of Daniel Prude in Rochester, N.Y., Thursday, Sept. 3, 2020. While suffering a mental health crisis, Prude, 41, suffocated after police in Rochester put a “spit hood” over his head while being taken into custody. He died March 30 after he was taken off life support, seven days after the encounter with police. 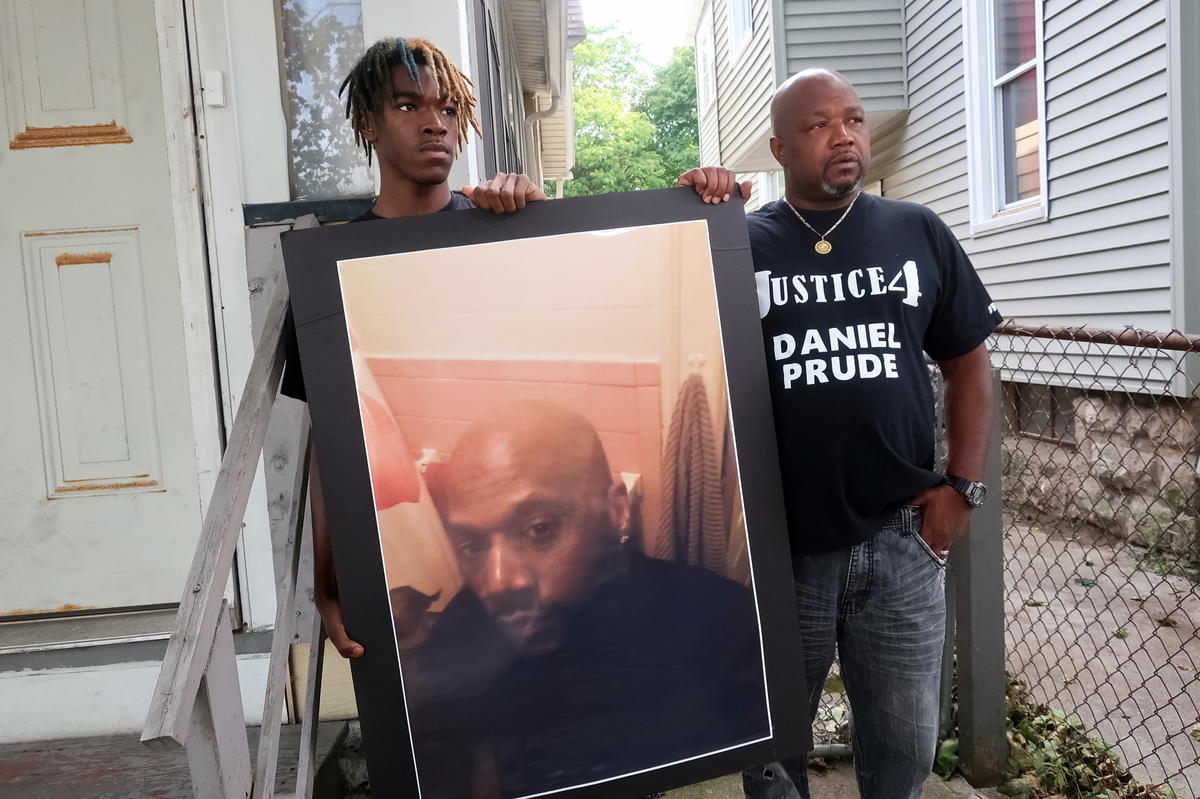 Family members Armin Prude (left) and Joe Prude stand with a picture of Daniel Prude in Rochester, N.Y., Thursday, Sept. 3, 2020. While suffering a mental health crisis, Prude, 41, suffocated after police in Rochester put a “spit hood” over his head while being taken into custody. He died March 30 after he was taken off life support, seven days after the encounter with police.

When Joe Prude called Rochester, New York, police to report his brother missing, he was struggling to understand why Daniel Prude had been released from the hospital hours earlier. Joe Prude described his brother’s suicidal behavior.

“He jumped 21 stairs down to my basement, headfirst,” Joe says in the early hours of March 23, in a video recorded by the responding officer’s body camera. Joe’s wife, Valerie, described Daniel nearly jumping in front of a train the previous day, on the tracks that run behind their house.

“The train missed him by this much,” Joe says, holding his thumb and pointer finger a few inches apart.

“When the doctor called me and told me that they released him, I’m saying, ‘How you going to sit here and tell me you’re going to release him when he was hurting himself? Come on. You weren’t sworn to do that,'” he says on the body camera footage.

At that point in the recorded conversation, it was just after 3 a.m. Joe and Valerie Prude knew only that Daniel was missing, delusional and vulnerable. They didn’t know his next encounter with the police would be fatal.

Police would find Daniel minutes later ― naked, acting irrationally. Because he spat in the direction of officers and allegedly said he had the novel coronavirus, officers placed a white hood, called a “spit hood,” over his head. When he started trying to stand up, despite being restrained by handcuffs, an officer placed much of his body weight over Daniel’s head and pushed it into the pavement.

Daniel died a week later when his family took him off life support. The county medical examiner’s autopsy described his death as a homicide and listed the immediate cause of death as “complications of asphyxia in the setting of physical restraint.” After the police footage was released in early September, the incident garnered widespread attention as another example of a Black man killed after an encounter with police.

Less attention has been paid to what happened to Daniel Prude in the preceding hours, when he was treated and released after a psychiatric assessment at Strong Memorial Hospital, run by the University of Rochester Medical Center.

On March 22, Joe Prude had called police at about 7 p.m. because he needed help getting Daniel to the hospital. Daniel had been having problems with a PCP addiction, Joe told officers. Now he had begun telling Joe and Valerie that people were out to get him, and he wanted to die.

By about 11 p.m. that night, Daniel was released from the hospital, according to Joe and police records. “He was calm as hell when he got back here,” Joe told police.

“He was fine for a little bit, then all of a sudden started acting crazy,” Joe said. He told police later that Daniel asked him for a cigarette, and when he went to get one, Daniel took off running. He was barefoot, wearing only a tank top and long johns in 30 degree weather.

Around 3 a.m., four hours after his release from the hospital, emergency dispatchers started fielding calls about Daniel Prude. His brother called to report him missing, and a tow truck driver had spotted him, naked and bloodied, on West Main Street, police records show.

While he was restrained, Prude’s breathing stopped. An ambulance crew resuscitated him, but he was in critical condition. His brain was damaged after being deprived of oxygen. He died a week later at Strong Memorial after being taken off life support.

The University of Rochester Medical Center said patient privacy laws bar it from discussing the specifics of Prude’s treatment and release, according to spokesperson Chip Partner. But in general, Partner added, the hospital is bound by a New York state law that requires patients to be released within 24 hours unless they have a mental illness that is likely to result in serious harm to themselves or others, and that requires immediate observation, care and hospital treatment.

The details of Prude’s encounters with law enforcement and the health care system offer a look into the practice of emergency psychiatry, and how, as in many branches of medicine in the U.S., mistakes in that field are disproportionately borne by Black people.

Medical decisions in a case like Daniel Prude’s are high-stakes, with little margin for error, says Dr. Ken Duckworth, chief medical officer of the National Alliance on Mental Illness (NAMI).

“Emergency psychiatric assessment is very challenging, and the potential for catastrophic outcomes following your decision is very real,” he says.

The hospital where Prude died has faced scrutiny over its treatment of psychiatric patients and discharge procedures before. 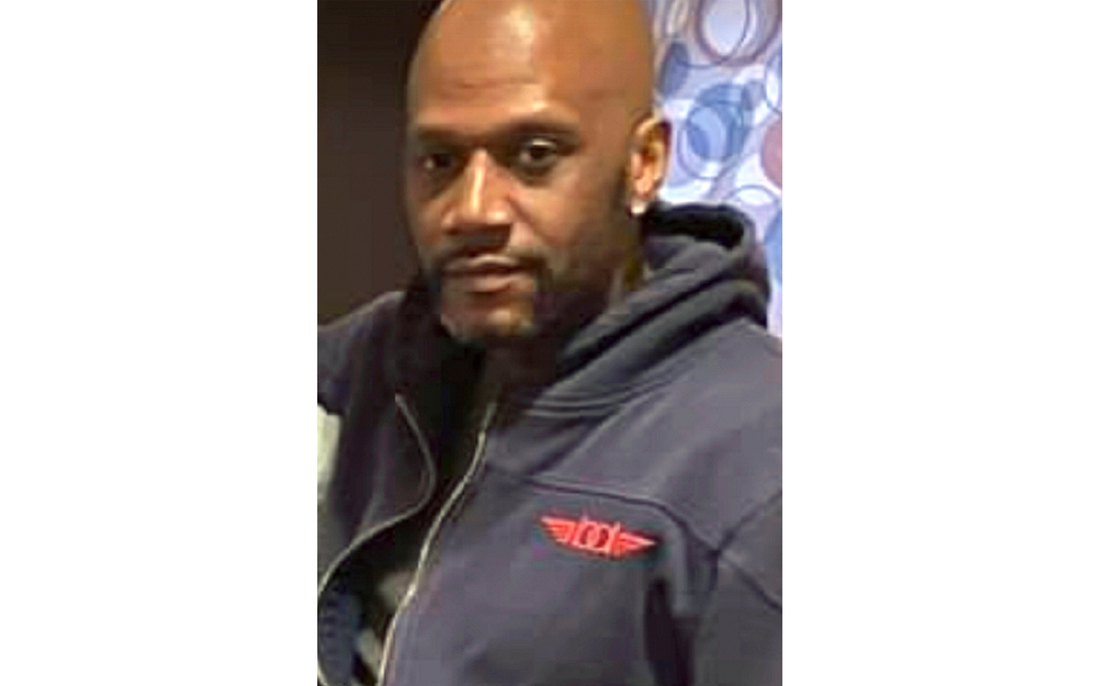 Hours before his encounter with police, Daniel Prude was released following a psychiatric assessment at Strong Memorial Hospital in Rochester. A New York State law states that patients must be released within 24 hours unless they have a mental illness that is likely to result in serious harm to themselves or others and requires immediate observation and treatment. Undated photo of Daniel Prude.

In April 2018, federal inspectors found security officers at the hospital had used law enforcement restraint techniques against a pediatric psychiatry patient, breaking her arm and sending her to the emergency room.

Months later, inspectors found the hospital discharged a patient who was in the emergency room with a history of dementia and multiple medical problems — despite a discrepancy in her address between her medical record and the information she gave hospital staff.

In early 2016, inspectors found that hospital staff had placed patients in ankle and wrist restraints without an order to do so, and placed another patient in restraints without documenting when the restraints were released. Restraints are meant to be used only with a physician’s order, and federal rules require precise documentation of their use.

Hospital spokesperson Chip Partner says that immediately after the April 2018 inspection, the hospital changed its public safety protocol, eliminating the use of law enforcement techniques to manage a violent patient unless that patient is being arrested.

In addition, updated staff training and discharge protocols for psychiatric incidents now decrease the risk of discharging someone who is not ready to be released, Partner says. “These protocols were well established in 2020 and had absolutely no bearing on the evaluation or treatment of Daniel Prude on March 22.”

Prude’s case is unusual because the consequences of doctors’ decision to release him have played out so publicly, says NAMI’s Duckworth. Usually, emergency room psychiatrists never find out what happens to their patients.

Duckworth adds that he would not second-guess the actions of Prude’s hospital team in the moment, but with the benefit of hindsight, “there’s overwhelming evidence that he had a psychotic illness and was quite vulnerable,” he says. “He didn’t need to die.”

In a statement, URMC said its treatment of Prude was “medically appropriate and compassionate.”

The university medical center itself is still conducting an internal clinical review.

Dr. Altha Stewart, past president of the American Psychiatric Association, says unconscious bias can cloud clinicians’ judgment and make it difficult for them to make the best possible decisions for their patients.

“It is very clear that in today’s health care system, bias is built in structurally,” Stewart says. “Seeing a tall, imposing Black man who is behaving aggressively puts in place a series of ideas and thoughts and assumptions that direct decision-making.”

Psychiatric disorders in Black patients are less likely to be taken seriously than in white patients, Stewart says. The unequal treatment starts early. 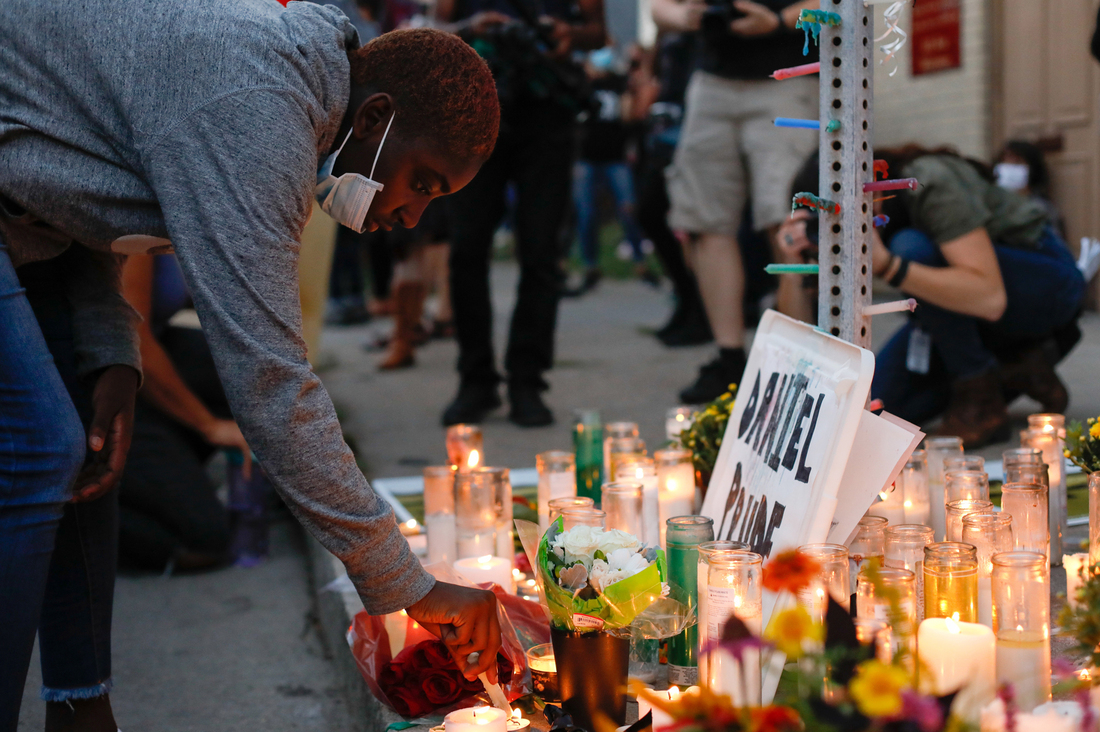 A demonstrator lights a candle in front of a memorial on Sept. 3, while taking part in a protest against police over the death of Daniel Prude in Rochester, New York.

Black boys are viewed as adults more often than white boys of the same age, says Stewart, who is also the director of the Center for Health in Justice Involved Youth at the University of Tennessee.

“So a Black child with a meltdown is described as aggressive, obstinate, oppositional,” she says, “as opposed to traumatized, depressed, anxious.”

Those expectations follow Black boys through adulthood and in the health care system, increasing the odds that doctors will view Black men as a lost cause and provide subpar care, Stewart says.

She stressed that she does not have any direct knowledge of deficiencies in the care of Daniel Prude, but she says that Black men, like Prude, are disproportionately likely to be misdiagnosed, mistreated and written off as a result of structural bias and unconscious racism.

In response to questions from NPR and Kaiser Health News about whether the hospital’s treatment of Prude could have been affected by his race, Partner says the medical center decided to ask Dr. Stewart “to conduct a third-party independent review through her lens as a national expert on racism and bias in psychiatric care.”

A group of medical students at the University of Rochester wrote in an open letter that Daniel Prude was “sentenced to death by our failed healthcare system.”

“Not only do our current models of healthcare leave gaping holes for individuals such as Daniel to fall through, but they do so in manners which are fraught with racism,” the students wrote.

Partner, the medical center spokesperson, said the psychiatry department’s Office of Diversity, Inclusion, Culture and Equity will evaluate Daniel’s treatment for potential bias. He says the medical center “recognizes that we have a long way to go before we can confidently say that our policies and practices are universally culturally appropriate to the populations we serve.”

Both Stewart and Duckworth say that reducing the role of police in addressing mental health crises would increase the odds of survival for a person released too early from psychiatric care. 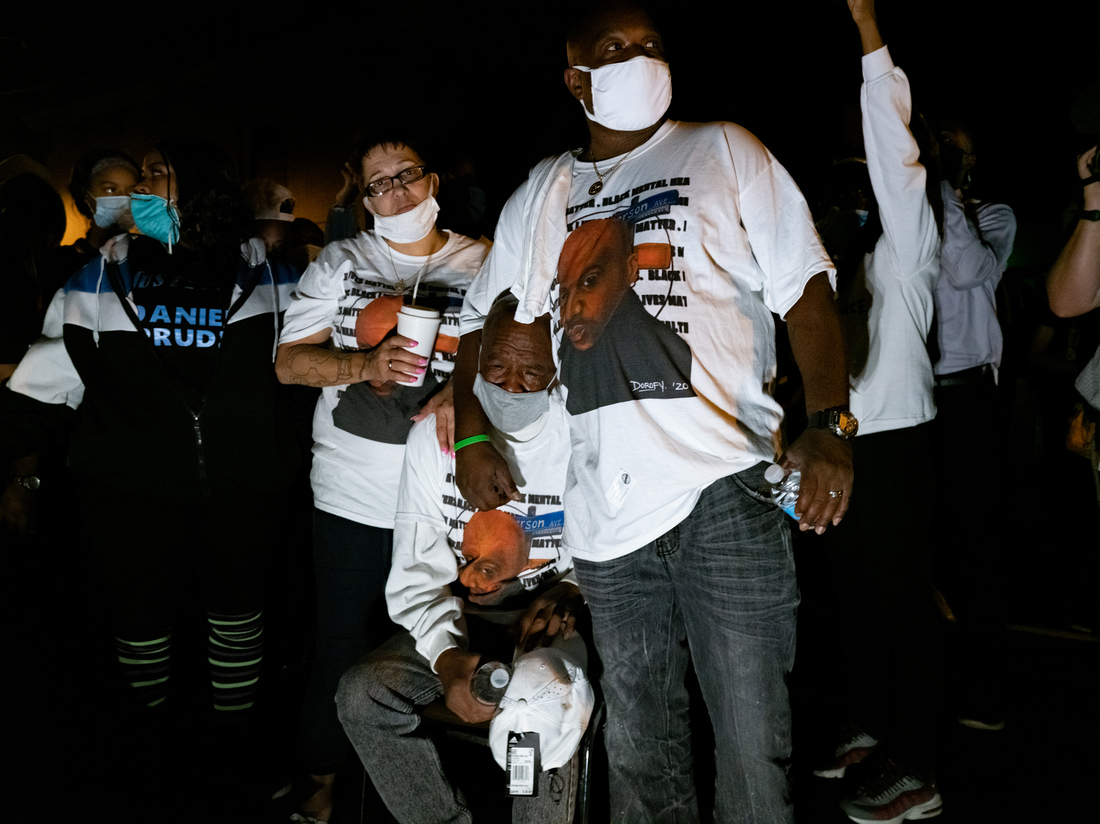 Relatives of Daniel Prude, visiting from Chicago and Florida, take part in a community celebration of life in Prude’s memory on Sept. 10 in Rochester, New York. The event took place on Jefferson Avenue, the street where police arrested Prude March 23, an encounter which led to his death.

Federal inspection reports show that hospitals across the country have released patients who, like Prude, ended up in grave danger only shortly thereafter.

A spokesperson for UT Health East Texas said the health system has since implemented a process for staff to more thoroughly document mental health concerns in patient records. Mercy Hospital in St. Louis said it takes the health and safety of each patient very seriously “regardless of race, ethnicity or ability to pay.”

Neither of the other hospitals responded to emails or calls seeking comment.