Microsoft officially retired its Internet Explorer browser last Wednesday (15th), announcing that it will no longer receive any updates or patches from Windows 10.

The company has been rehearsing for a while now as it focuses on its new Microsoft Edge, but even if that’s not surprising, the date is set for South Korean software engineer Jung Ki-young.

Microsoft Edge gets WebView2 feature to ease transition for IE developers
Facts About Internet Explorer, King of the Internet in the 2000s

“Great tool for downloading other browsers”

The boy decided to commemorate the event in a very interesting way: by erecting a tombstone for the old navigator. According to him, the retirement of Internet Explorer marks the end of a love-hate relationship after 25 years of using the tool.

It took him a month to design and commission the tombstone in question, and 430,000 won out of his pocket. In a direct conversion, this value is approximately R$ 1,717 in the current conversion. In it, you can see the browser’s logo, the “e” for Explorer, and a fun little epitaph that says “It’s a great tool for downloading other browsers.”

When his brother decided to display the tombstone on the patio of his coffee shop in Gyeongju, it started as a joke and ended up going viral online. Soon, the photos began to circulate online, and tombstones became a topic of conversation online.

According to Jung, his feelings for the old navigator were mixed, and that’s what the tombstone represents. On the one hand, Internet Explorer has played a very important role in your career. On the other hand, this is already the cause of many headaches.

“It’s a head-scratcher, but I think it’s a love-hate relationship because the explorer himself ruled an era.”

According to him, getting his website designs and online applications to run in Explorer is more complex and laborious than other browsers. To make matters worse, many of their clients have been insisting that their websites work in Microsoft’s old browser. This is because it has been the default browser in many offices in South Korea for years, including the government itself and many banks.

According to him, he now has one more reason to thank Explorer because it allowed him to make a joke that became world-famous on the Internet.

The end of an era, the end of Internet Explorer 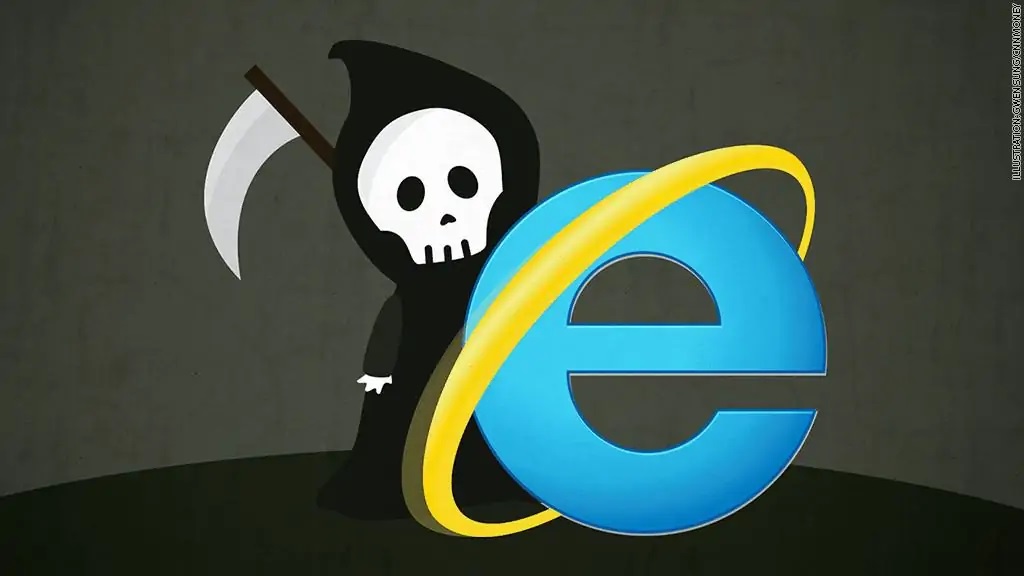 Internet Explorer was officially released in 1995, and by then it had become the category leader. It has held this title for over 10 years because it is the default browser for Windows and comes preinstalled on all computers running Microsoft’s operating system.

But in the late 2000s, it started to lose many users to Google Chrome, which is now the leader in the category. Over time, he started to become more and more “outdated”, eventually becoming a source of jokes and memes on the internet.

That’s why Microsoft itself has put the browser on hold for a while now, and now it wants to lead the market again with the current changes and evolution of the company’s latest browser, Microsoft Edge.

The retirement of Explorer is another way to get more people to migrate to the new Edge, bringing the small number of users who are still using the old browser to the new browser. This is important because while Microsoft is no longer supporting it, they will be completely disabling the browser and updating the OS for a short period of time.

“Not only does Edge provide a faster, safer, and more modern browsing experience than Internet Explorer, but it also addresses an important issue: compatibility with legacy websites and applications”

In other words, the idea is to kill the explorer once and for all, and there’s nothing better than a tombstone to symbolize the event.