Where there’s a will, there’s a way. Blocked by Apple’s strict policies on cloud gaming apps, Nvidia has launched the GeForce Now cloud gaming service on iOS, using the Safari web browser.

Nvidia and Epic Games said Fortnite is also coming soon to Safari for iOS, with touch controls. Fortnite was booted off iOS in August, after Epic Games got into a big legal battle with Apple over high fees and antitrust issues.

In September, Apple set up a lot of barriers in its iOS App Store policies for companies that want to stream games to iPhone users. Rather than go through those hoops, Nvidia is using the web browser to bring cloud games to iOS players. With cloud games, players connect to games that are hosted in cloud-connected servers in datacenters, which process the gameplay and send videos back to players who can view it on any screen.

Cloud gaming is convenient because it’s instantly accessible and can make it easy to play high-end games on low-end hardware, like playing a PC game on a phone. But Apple presumably didn’t like that it bypassed the App Store and didn’t allow the iOS company to collect its 30% fee on game purchases. Apple asked cloud gaming providers to require players to download a game from the App Store and pay Apple its commission, but Nvidia is bypassing that route by using a backdoor Apple fully supports.

Nvidia GeForce Now head Phil Eisler said in a press briefing that earlier work with Chromebooks on WebRTC technology paved the way for the debut on Safari for iOS. He noted that Apple suggested Nvidia go the route of the web when it struggled to surmount the hurdles of an app on iOS.

“We’ve made a dedication to be an open store platform,” Eisler said. “It’s a core tenet. We want to support all of the PC game stores so that gamers can bring their own games that they own on those stores already.”

He added, “We want to bring the cloud benefits to PC gamers so that you can take all the games you own and run [them] on a GeForce GPU with the performance compatibility you expect. And you can take all your devices. We started with Mac, PC, Android mobile, Android TV devices. We recently added a Chromebook client based on WebRTC. And we have an exciting update today about our web client on iOS Safari.”

GeForce Now has more than 5 million members. People can join the service for $5 a month and get access to 750 games, including more than 75 free-to-play games. Eisler said Nvidia streams more than 15 million hours of games from 250 publishers monthly. Nvidia now has 22 datacenters for the service, which is available in 70 countries. 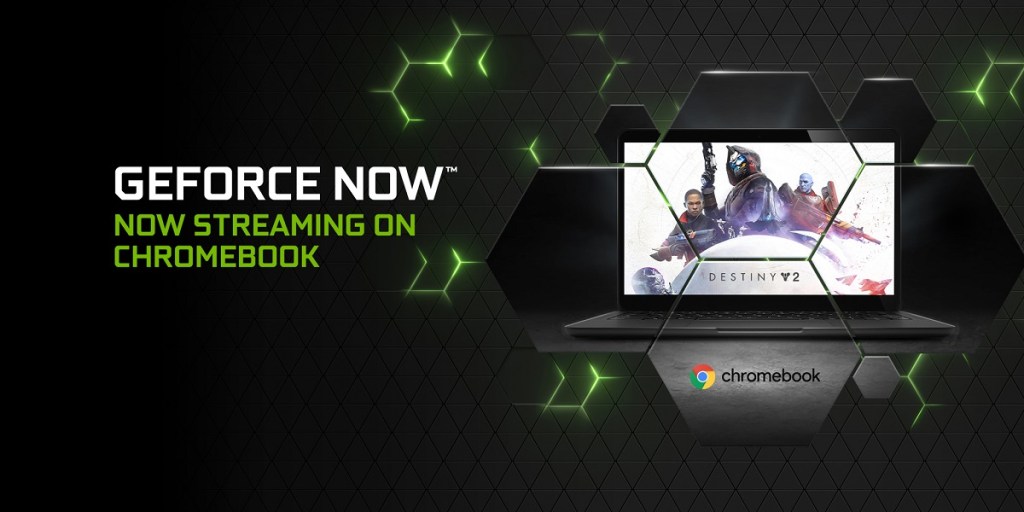 Above: GeForce Now cloud gaming is available on Chromebooks.

Players can instantly access games like Assassin’s Creed: Valhalla, Destiny 2: Beyond Light, Shadow of the Tomb Raider. Founders can also play titles like Watch Dogs: Legion with advanced real-time ray tracing technologies such as RTX and DLSS, even on their iPhone or iPad.

GeForce Now on iOS Safari requires a gamepad — keyboard and mouse-only games aren’t available due to hardware limitations. For the best experience, Nvidia recommends a GeForce Now recommended gamepad, like the Razer Kishi.

“We’ve been testing it internally, and we are really liking the experience,” Eisler said. “You’ll be able to pair a Bluetooth gamepad, Xbox, PlayStation 4, or some of the mobile-oriented ones like the Razer Kishi with your iPhone.”

Eisler said Nvidia will deliver a cloud-streaming version of Fortnite through GeForce Now. The conversion to touch-friendly play is causing the delay, as other GeForce Now games are played with controllers or keyboards/mice.

Nvidia manages the game updates and patches, letting people play the games they own at 1080p, 60fps across nearly all devices.

Nvidia said that since GeForce Now started running in August on the Chrome browser, more than 10% of all gameplay happens in the Chrome web-based client. Now it is expanding beyond Chromebooks to Linux, PC, Mac, and Android.