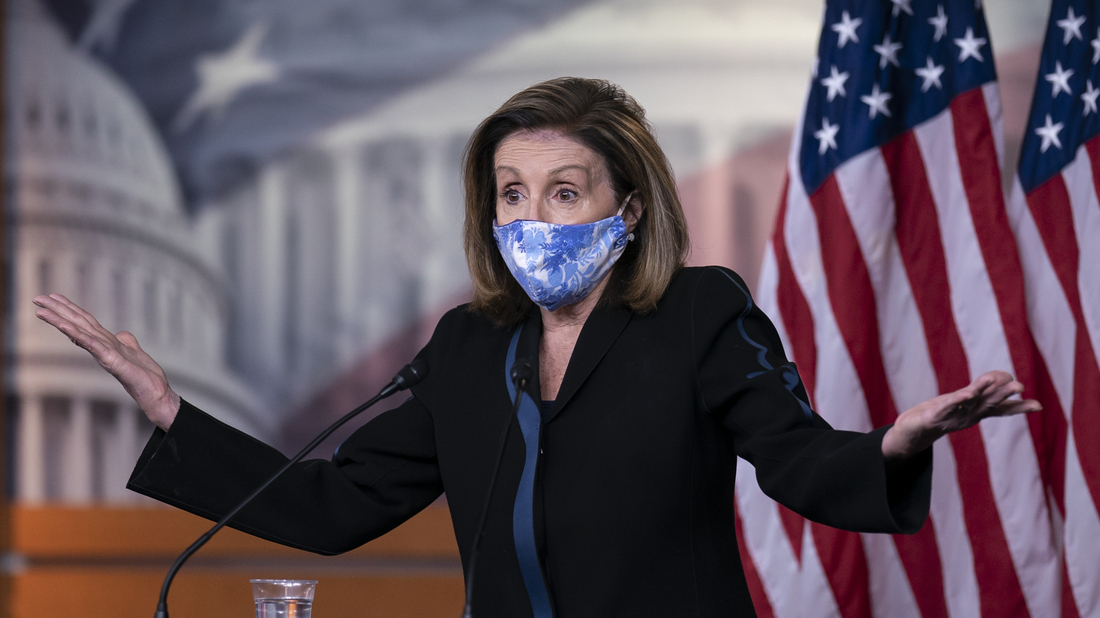 House Speaker Nancy Pelosi, D-Calif., downplayed losses in this year’s elections, pointing out that Democrats made historic gains in 2018. 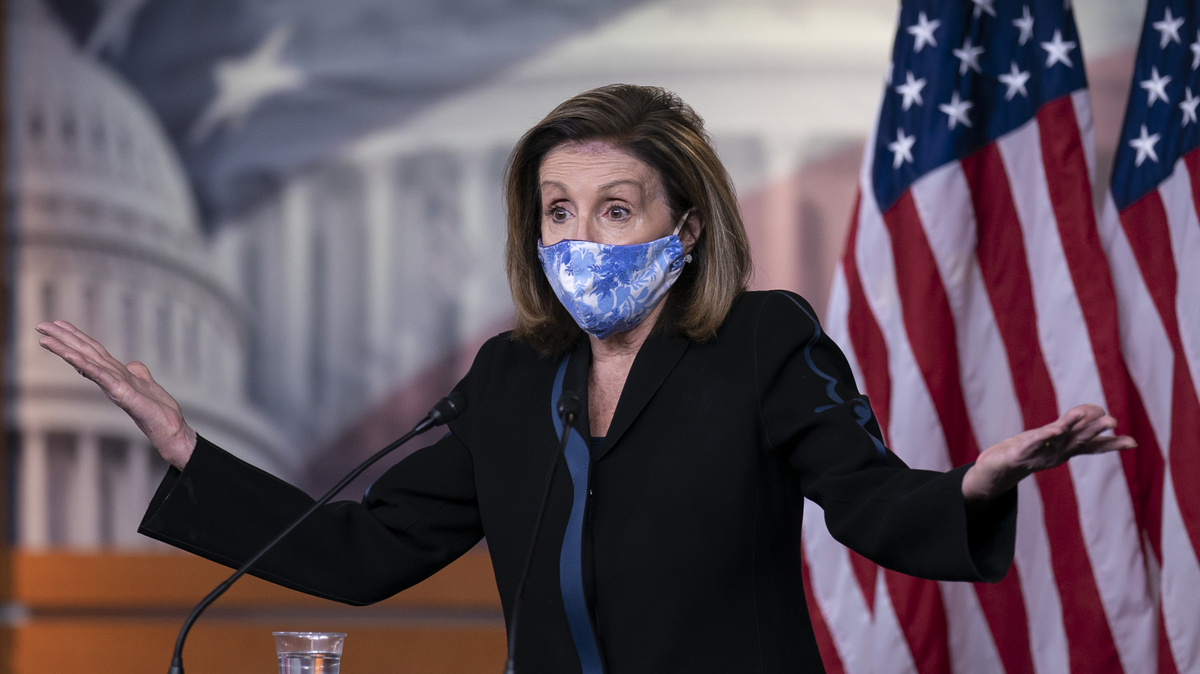 House Speaker Nancy Pelosi, D-Calif., downplayed losses in this year’s elections, pointing out that Democrats made historic gains in 2018.

House Democrats started this month hoping, and preparing, to gain seats in the election. Instead, their once robust majority in the House has dwindled and Democrats are on track to begin next year with the slimmest majority in decades.

Now members on the progressive left and party moderates are again at odds over whose policies won in 2020 and how they should govern as a party.

Some Democrats are frustrated that the debate is happening at all. Joe Biden won the presidential election, Democrats will hold their majority in the House. While the control of the Senate is still to be decided, House Speaker Nancy Pelosi, D-Calif., returned to Washington after the election to celebrate the wins that have already materialized.

“We’ll be able to do great things for the American people,” Pelosi told reporters at a press conference. “We’ve lost some battles but we won the war. We have the gavel.”

But Democrats lost a lot of battles. House Republicans have gained six seats and have advantages in several races that have yet to be called, despite going into the election with the expectation that Democrats could win as many at 15 seats.

Polling on both sides of the aisle showed Democrats with advantages in key districts in states like Texas and Indiana where they hoped to gain new seats. Tight races in places like Iowa and New York broke in favor of Republicans when the votes were tallied.

“I think people are mourning the loss of some colleagues that wasn’t as expected as it should have been,” Jayapal said in an interview with NPR. “I think we just have to be real about what happened here. And we should focus on our long-term organizing strategy, because I think that is what is ultimately going to help us.”

For progressives like Jayapal, that long-term organizing strategy involves bringing out young, diverse, new voters who are energized by progressive policies like Medicare for All, a $15 minimum wage and an aggressive approach to curbing climate change.

Jayapal points to enormous turnout in cities like Atlanta as an example of what an energized coalition can do. Those voters have boosted Biden’s numbers in Georgia, putting him ahead and on the verge of winning that state for Democrats after decades of Republican wins.

She and other progressives say they helped drive the party’s national platform to the left on major social issues and that, in turn, motivated voters to the polls. She says progressives also worked as emissaries for the party in communities that voted in huge numbers this year.

“[Progressives] helped Joe Biden deliver a very progressive agenda,” Jayapal said. “That led to this huge turnout of young people, black and brown and immigrant voters that delivered US victories in these key states.”

Moderates say big progressive turnout in cities and suburbs may drive up Democrats’ numbers in state wide and presidential races. But in their closely divided districts, they argue some progressive messages can turn toxic.

Rep. Abigail Spanberger was narrowly reelected in a Virginia district that went for Republicans from 1971 until she won in 2018. She says Democrats need to focus more on proactive messages and passing bills that speak to people, like funding for education and expanded rural broadband. She told NPR the party needs to be communicating to all voters, not just a progressive base, about how those policies impact them.

“I think it’s important that we recognize that, you know, while importantly and wonderfully, Joe Biden is our president elect, the man he ran against, our current president got 70 million Americans to vote for him,” Spanberger said in an interview. “We are asking for people to give us the responsibility of legislating. And we have to be clear on what we intend to do with that responsibility.”

“Defunding the police” cited as main impediment with swing voters

Moderates say they’ve been hamstrung by political slogans that don’t actually reflect the policies Democrats have passed. Like “defund the police.”

Democrats passed a sweeping police reform package this year called the George Floyd Justice in Policing Act. That bill outlawed chokeholds, gave the Department of Justice greater power to intervene in use of force cases, created a national registry for police conduct complaints and restructured the pipeline of military equipment to local police departments. It did not defund the police.

“People know what the term defund means,” Spanberger said. “I have had people just across the spectrum say they don’t want to see police departments defunded.”

But “defund the police” was an effective attack line for Republicans in tight races were Democrats lost. One example is Rep. Max Rose, D-NY., who lost in a district that was blanketed with an ad of New York City police officers talking about how Rose betrayed them.

“He promised us he was going to support the police and then he marches with people wanting to defund the police,” recounts an officer in the ad.

This division isn’t new for Democrats. Pelosi often says the diversity of her caucus extends to some parts of their ideology. That is something Democrats often publicly celebrate, but the divisions become more critical as they look ahead to legislate with President-elect Biden.

Both sides of the party are looking for someone to blame as the losses sink in. Some blame the polls. Some blame internal calculations at the Democratic Congressional Campaign Committee. The finger pointing boiled over in a party conference call recently and DCCC chairwoman Cheri Bustos, D-Ill., announced a few days later that she would not seek re-election to that leadership job.

Pelosi and her top leadership team are expected to be easily re-elected to their posts, but the race for who will succeed Bustos has intensified.

California Congressman Tony Cardenas, who is running to lead the DCCC, says it’s wrong to argue that the party must choose between either retaining disaffected Republicans and moderates or winning over progressives.

“I think the emphasis of trying to hold on to a certain type of voter is the wrong place to start,” Cardenas said in an interview with NPR.

Cardenas said Democrats can win by connecting with diverse voters and winning their trust. But, he said, the party also must do the basic job of passing bills and getting legislation done.

“Unfortunately, we have a lot of good candidates who their message gets overshadowed by millions of dollars of the Republican message that just literally doesn’t even use their own words,” Cardenas said. “And those are the kinds of tactics that we’re having to combat.”

That’s something that most Democrats agree on. They say the next election won’t be centered on Democrats running against President Trump. They’ll be running on a record they plan to build with Biden.

New York Rep. Sean Patrick Maloney, who is competing against Cardenas to run the campaign committee, agreed. Maloney said Democrats in the House will be working on a Biden agenda and will have all of the power and support that being the party with a president in the White House affords.

“Joe Biden is the perfect president for the moment,” Maloney said. “He will help us turn the corner on the pandemic, get our businesses going again, open the economy responsibly and heal the wounds and repair some of the damage from the Trump years.”

But Maloney added that Democrats will also benefit from time.

“I also believe we’ll be entering the cycle next time with the pandemic, god willing, in the rear view mirror and an economy that’s in full rebound,” he said.

Deciding how what elements of the Biden agenda to enact first will be part of the challenge. Progressives want to see elements of the Green New Deal and health care reforms on the top of the list.

Biden himself has signaled plans to focus heavily on making the fight against COVID-19 his number one priority.

Many Democrats say a tightly tailored focus on the virus, the economy and kitchen table issues could unite them. Rep. Debbie Dingell, D-Mich., said Democrats need to keep that in mind as they define their agenda.

“We’re going to have to do core agenda items like trade deals that level the playing field — broadband, so that as we’re dealing with a pandemic, that urban schools and rural schools have the same access and equal opportunity so that people everybody’s got an education,” Dingell said. “The most important, valuable thing to have, we need to make sure that every young person can afford a college education and not graduate with staggering student debt, talking about just these issues that matter every day.”

Dingell says the political environment strayed far from that basic political work in the Trump years and Democrats have a chance to win over a wider range voters by renewing that focus.