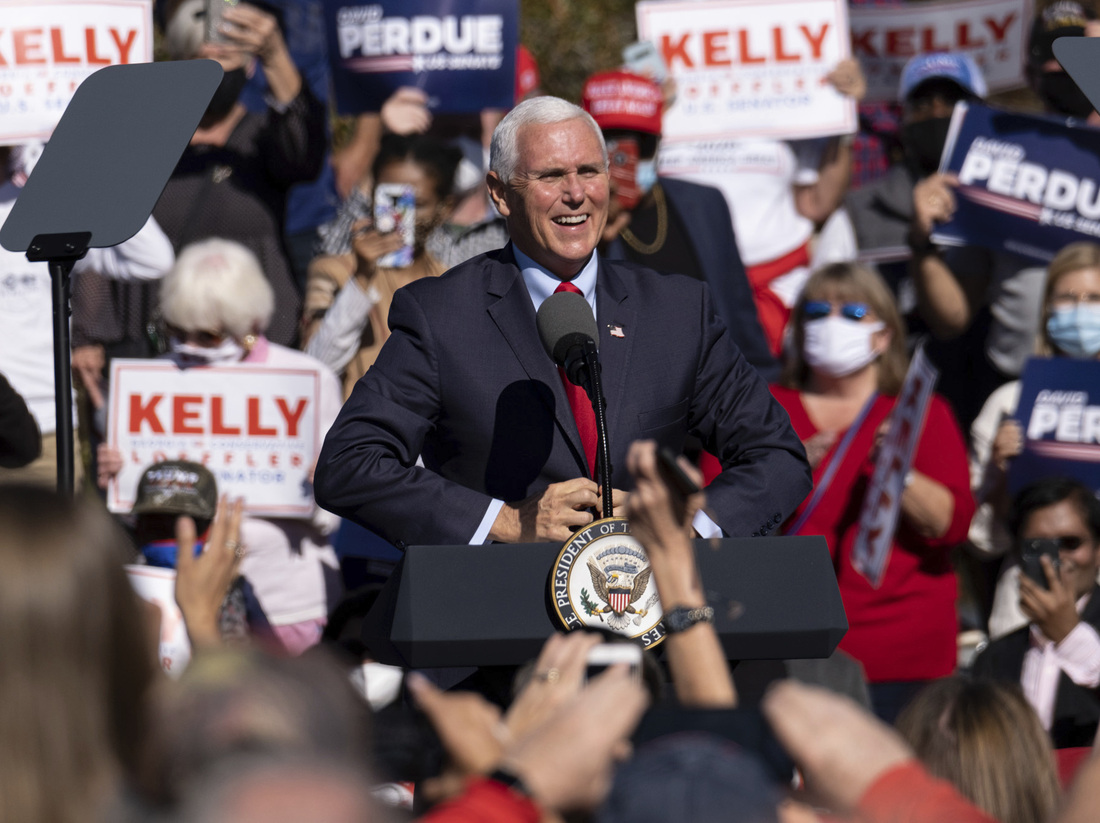 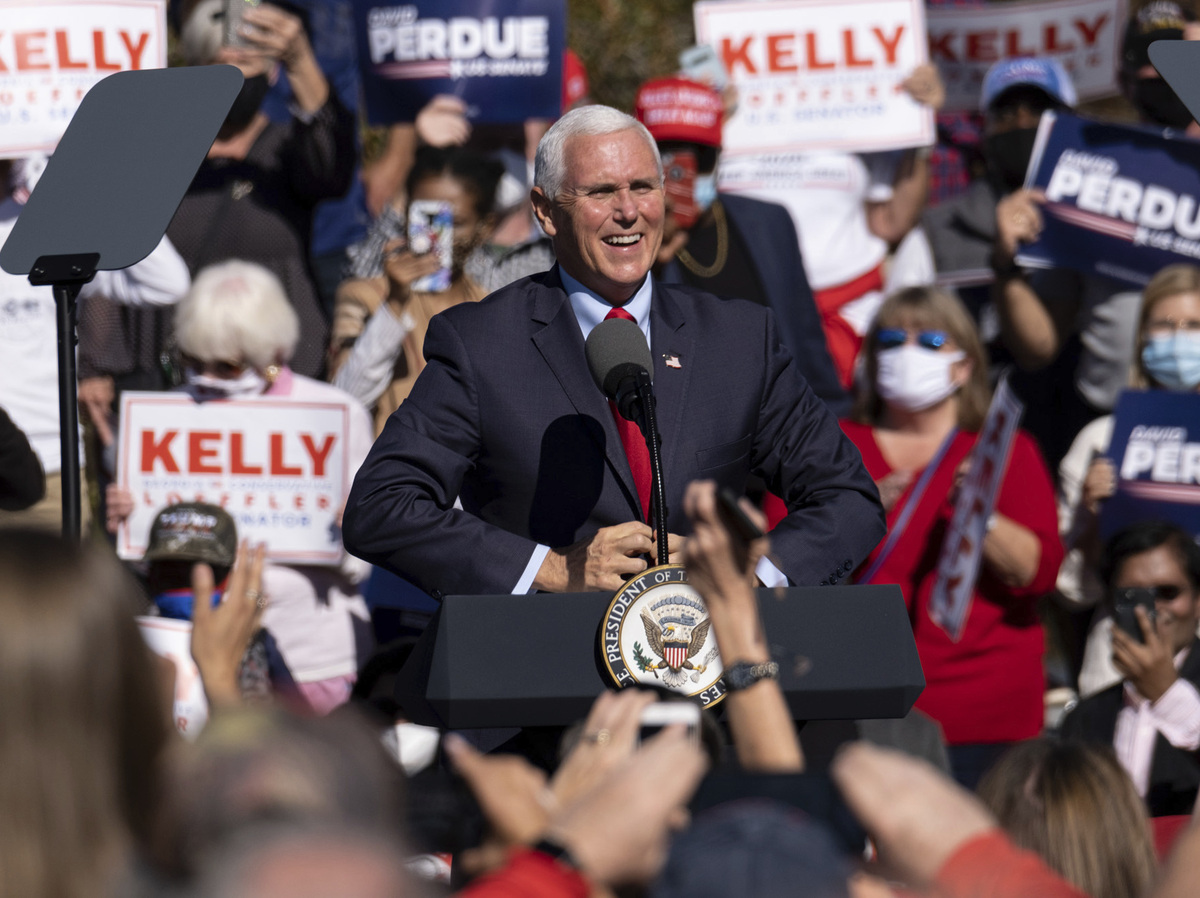 For the first time since President Trump lost his bid for reelection, Vice President Mike Pence appeared on the campaign trail on Friday to boost Senate Republicans at a pair of rallies north of Atlanta.

Two U.S. Senate seats in Georgia remain to be decided in runoff races on Jan. 5. The outcome will dictate which party will run the upper chamber come next year.

And with Trump and Pence still declining to concede their loss, GOP has been left with a tricky argument in Georgia for a high-stakes Senate battle as they try to navigate the president’s false claims.

Pence and other Republicans, including GOP Sens. David Perdue and Kelly Loeffler, who are vying to win those Georgia Senate seats, are also arguing the state now remains a final line of defense against Democrats.

The House will remain Democratically controlled, though at a slimmer margin thanks to gains by Republicans there.

“We are the battleground,” Loeffler told supporters. “We are the firewall.”

The November elections have so far handed Republicans 50 seats when the new Congress convenes in January. They’ll need to win one of Georgia’s two runoff races to retain control of the chamber.

Democrats, on the other hand, will need a sweep of the Georgia seats to gain the majority. With President-elect Joe Biden and Vice President-elect Kamala Harris at the helm, Harris could break ties for a 50-member party that largely includes Democrats and two independent senators who caucus with them.

On Friday, Pence made clear he was in Georgia on Trump’s behalf.

Since Election Day, Pence, like Trump, has largely kept out of public sight. Trump himself has been a source of disinformation, issuing false claims of widespread voter fraud and that he could overturn the election’s results.

Had they won, the GOP wouldn’t need the Georgia seats to retain their Senate majority as a Republican in the White House could break ties in their favor for a 51-member majority.

“This is the last line of defense. This is my last word to you today,” Perdue said in Canton as he was interrupted by cheers of “stop the steal!”

It was a nod to Trump’s false claims in the election targeting Democrats. For his part, Perdue paused, and then resumed with his same pitch without addressing the falsehood.

“What we have to do right now is hold the line,” Perdue said.

For Pence, his Friday campaign rally appearances are the most to date since the Nov. 3 elections. He spoke for more than 40 minutes at the two separate events in Canton and Gainesville.

Each rally drew hundreds of supporters, including families. Many waved Trump/Pence signs and other campaign merchandise, and boo’d at the mention of Democrats.

Pence also used the rallies as an opportunity to highlight the past work that the Trump administration has done, from supporting robust budgets for the military to the confirmation of new Supreme Court Justice Amy Coney Barrett.

For their part, Perdue and Loeffler are facing shifting demographics in the state.

On Thursday, just as Pence’s motorcade made its way to its first rally in Canton, the state had said it had certified election results confirming Biden had won the state. He’s first Democrat to do so since 1992.

But the GOP has seen a good run in special elections in the past. That includes a costly 2017 Atlanta House district race where Democrat Jon Ossoff lost a challenge to his GOP counterpart.

Now, Ossoff, a documentary filmmaker, is facing off against Perdue, a one-term senator who is seeking reelection.

Loeffler, who was appointed to her seat in January, is running against a popular Democrat in Raphael Warnock. Warnock is a reverend at the Ebenezer Baptist Church in Atlanta, where civil rights icon Martin Luther King Jr. was also a member.

Loeffler and Warnock are vying for a special election to fill the seat of retired Sen. Johnny Isakson.

In her short time in the seat, Loeffler has faced controversy over dumping $20 million in stocks after a closed-door Senate briefing on the coronavirus in January. Loeffler, who has held a stake in the WNBA team, the Atlanta Dreams, also came under attack for her remarks regarding the Black Lives Matter movement.

On Friday, she framed her attack against Democrats as one against an unrestrained party that could threaten conservatism.

“We are going to stand up for conservative values because look at what Donald Trump has done for our country,” she said to cheers to a crowd in Gainesville, which responded with chants of “U.S.A!” that Loeffler joined in on.

Biden was only mentioned by former Georgia Gov. and current Agriculture Secretary Sonny Perdue at the Friday rallies. Perdue was attacking the president-elect, along with House Speaker Nancy Pelosi and Senate Democratic Leader Chuck Schumer.

“We’re going to re-elect Senator David Perdue and Senator Kelly Loeffler so that Schumer and Pelosi and Biden can’t have a blank check on America’s values,” Sonny Perdue said to cheers. “You’re the ones — America is counting on you and we’re counting on you.”