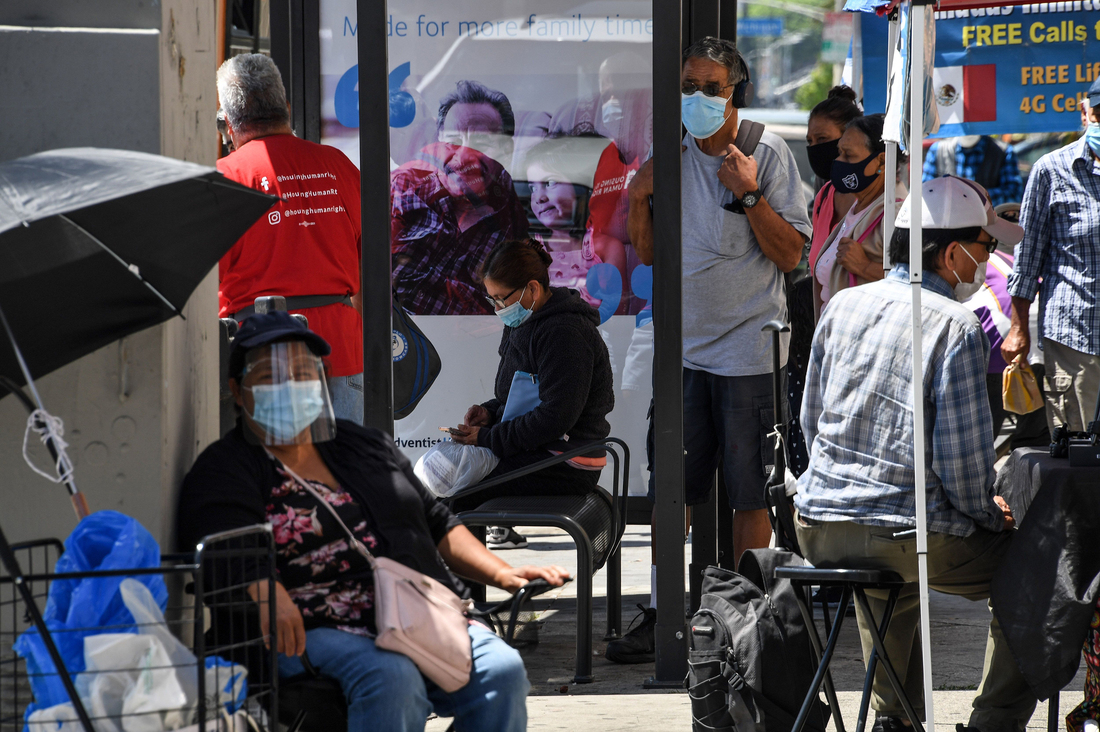 People wait for a bus in August in East Los Angeles. Latinos have the highest rate of labor force participation of any group in California — many in public-facing jobs deemed essential. That work has put them at higher risk of catching the coronavirus. 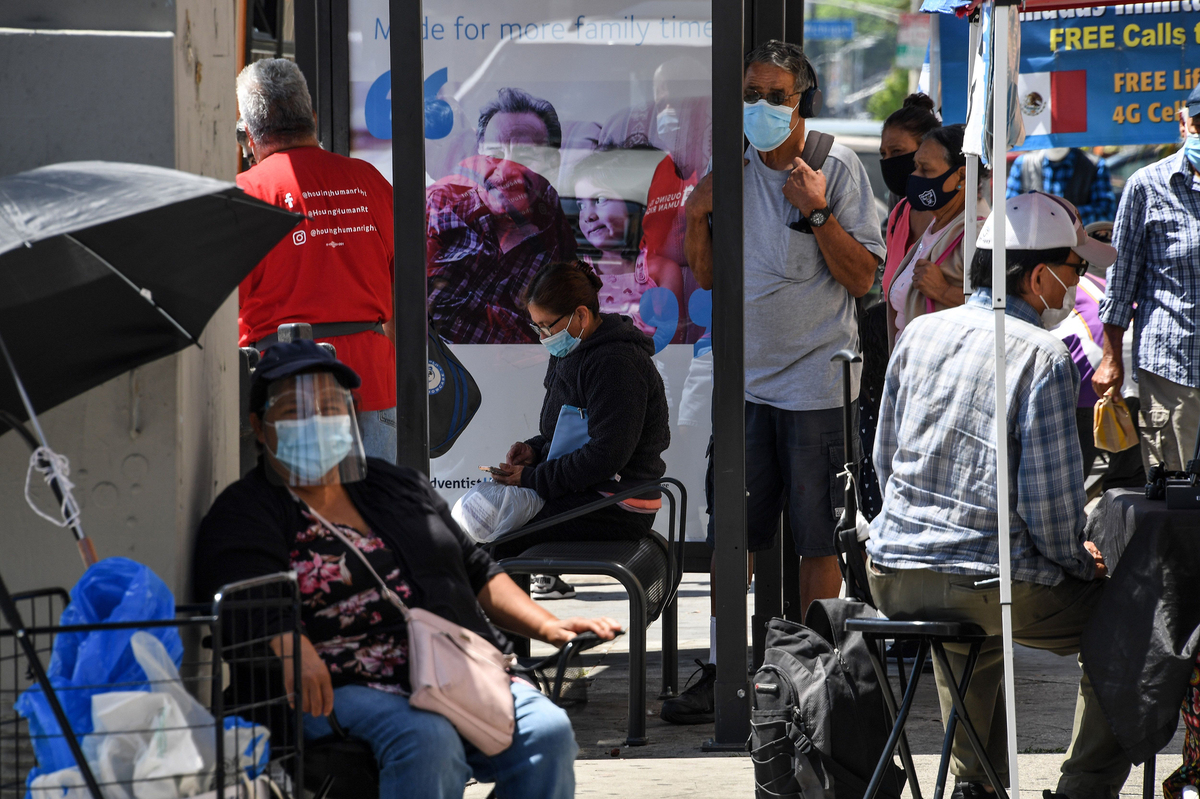 People wait for a bus in August in East Los Angeles. Latinos have the highest rate of labor force participation of any group in California — many in public-facing jobs deemed essential. That work has put them at higher risk of catching the coronavirus.

Working as a fast-food cashier in Los Angeles, Juan Quezada spends a lot of his time these days telling customers how to wear a mask.

“They cover their mouth but not their nose,” he says. “And we’re like, ‘You gotta put your mask on right.’ “

Quezada didn’t expect to be enforcing mask-wearing. Six months ago he was a restaurant manager, making $30 an hour, working full time and saving for retirement. But when Los Angeles County health officials shut down most restaurants in March because of the spreading pandemic, Quezada lost his job. The only work he can find now pays a lot less and is part time.

“I only work three hours and four hours rather than eight or 10 or 12 like I used to work,” he says.

Quezada doesn’t know anyone who has gotten COVID-19, but the pandemic has affected nearly every aspect of his life. “I am just draining my savings — draining and draining and draining,” he tells NPR. “I have to sell my car. Uber is a luxury.” Mostly, he now bikes or rides the bus to his part-time job.

Quezada is one of hundreds of people who responded in a newly published poll by NPR, the Robert Wood Johnson Foundation and the Harvard T.H. Chan School of Public Health. Among other things, the poll, which surveyed people from July 1 to Aug. 3, found that a whopping 71% of Latino households in Los Angeles have experienced serious financial problems during the pandemic, compared with 52% of Black households there and 37% of whites.

Like Quezada, many are burning through their savings and are having a hard time paying for necessities such as food.

He estimates he has about six months of savings left, and he’s not alone. In Los Angeles, more than 35% of households report serious problems with paying credit cards, loans or other bills, while the same percentage report having depleted all or most of their savings. Eleven percent of Angelenos polled say they didn’t have any savings at the start of the outbreak.

Nationally, the picture is similar. In the latest results released Wednesday, the NPR poll found that 72% of Latino households around the country report they’re facing serious financial problems, double the share of whites who say this. And 46% of Latino households reported they have used up all or most of their savings during the pandemic.

Nationally, the NPR poll finds that 63% of Latinos report they have lost household income either through reduced hours or wages, furloughs or job loss since the start of the pandemic.

But Latinos have kept working through the crisis, says David Hayes-Bautista, a professor of medicine and public health at UCLA.

“In Washington, the idea is you’re poor because you don’t work. That’s not the issue with Latinos,” he says.

“Latinos work. But they’re poor. The problem is, we don’t pay them.”

He’s not exaggerating. Latinos have the highest rate of labor force participation of any group in California. In March, when state and local officials shut down many businesses, Latinos lost jobs like everyone else. But Latinos got back to work faster.

“In April, the Latino [labor force participation] rate bounced right back up and actually has continued to increase slowly, whereas the non-Latino rate is dropping,” Hayes-Bautista says. “The reward that Latinos have for their high work ethic is a high rate of poverty.”

That work ethic has also contributed to a much higher rate of COVID-19. Hayes-Bautista points out that in California, as in some other regions in the U.S., Latinos tend to hold many of the jobs that have been deemed essential, and that’s made them highly susceptible to the coronavirus. Latinos now account for 60% of COVID-19 cases in California, even though they’re about 40% of the population.

Not only are they getting infected, but there’s been a fivefold increase in working-age Latinos dying from the coronavirus since May.

“These are workers usually in their prime years — peak earning power and everything else,” Hayes-Bautista says. “Latinos between 50 and 69, those are the ones that are being hit the hardest. That’s pretty worrying.”

Exposed — and often without health insurance

Nationally, according to the NPR poll, one in four Latino households report serious problems affording medical care during the pandemic.

Many of the essential jobs that Latinos are more likely to do — farmworker or nursing home aide or other contract work, for example — lack benefits. That means some Latinos are more exposed to the coronavirus and less likely to have health insurance because they don’t get coverage through an employer.

Others, such as Mariel Alvarez, lack health insurance because of citizenship restrictions. She lives with her parents and sisters in Los Angeles County’s San Fernando Valley. Alvarez lost her sales job and her employer-sponsored health insurance when the pandemic hit in March, she says. Then she got sick.

Eventually her whole family was ill. Alvarez had to pay out of pocket to go to a CVS clinic near her home. But after a couple of $50 visits, it got too expensive.

“I just couldn’t afford to continue to go to the doctor,” she says. She thinks it was COVID-19, but she was never able to get tested.

Now that she’s recovered, getting a job with health insurance is crucial, because she doesn’t qualify for any state or federal support. Alvarez is undocumented and was brought to the U.S. by her parents as a child from Bolivia. She’s one of roughly 640,000 immigrants who has a permit allowing her to work and defer deportation under the Deferred Action for Childhood Arrivals program, or DACA.

“I don’t want to jeopardize that,” Alvarez says. “You’re not supposed to use any of the government assistance when you’re on that. You’re only supposed to work, and that’s it.”

The pandemic has created a big need for one job — contact tracers. So Alvarez completed a free certificate online in the hope that it will give her an edge. She’s going through the application process; if she gets hired, she hopes to have benefits again.

In the meantime, she’ll do her best not to get sick.

Jackie Fortiér is health reporter for KPCC and LAist.com.