WWDC 2022 is highly anticipated, as Apple’s various systems are known to have many new features. The company always surprises at these moments and showcases the best it has for programmers.

The Cupertino giant isn’t taking its credit for others and has revolutionized the game once again, bringing with it a lot of important news and improvements. Expect surprises later this year. So keep in mind what Apple showed at this year’s WWDC. 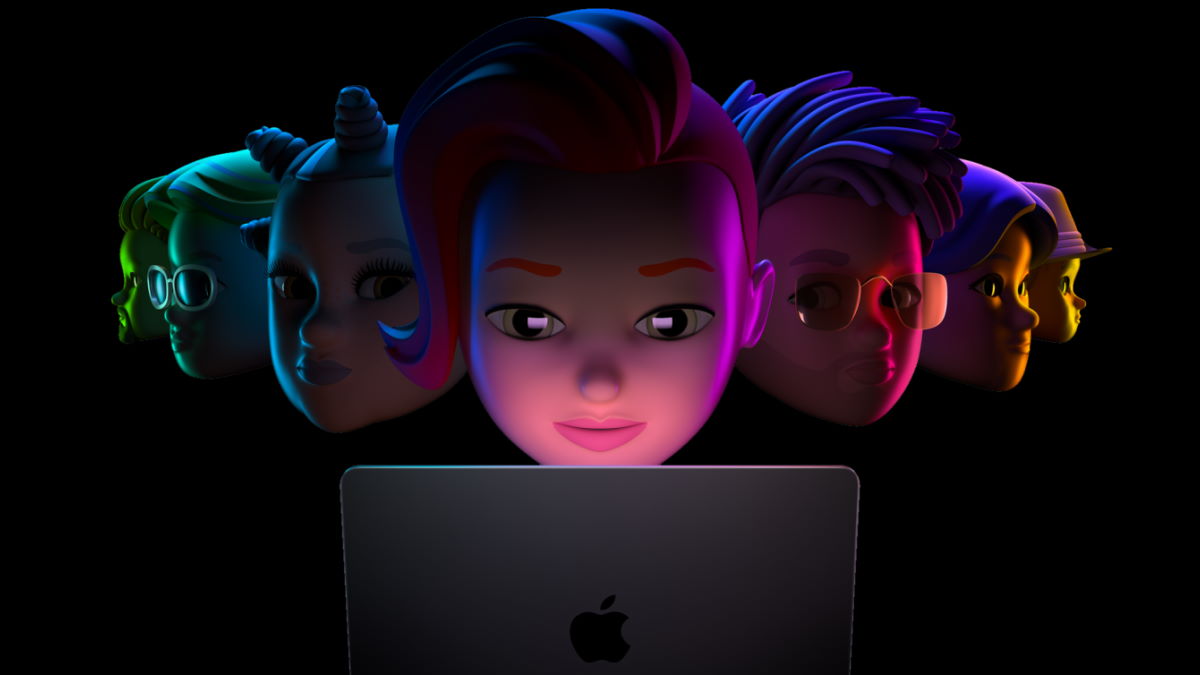 Expect these novelties across its 4 main operating systems, which take different approaches and feature many improvements. The truth is that everyone is entitled to special attention, which can be seen from what is presented.

iOS 16 is more than just an update

The system that gets the most attention from Apple is iOS. This new version, iOS 16, has many new features that make it almost a whole new system. The brand's stakes go far beyond the details, and nearly every extension has been improved.

One of the biggest and most important changes is the lock screen. This one is more appealing and now has room to receive new widgets. These complement the presence of the watch, which is now less prominent than the final image. These screens can be created quickly and fully customized. 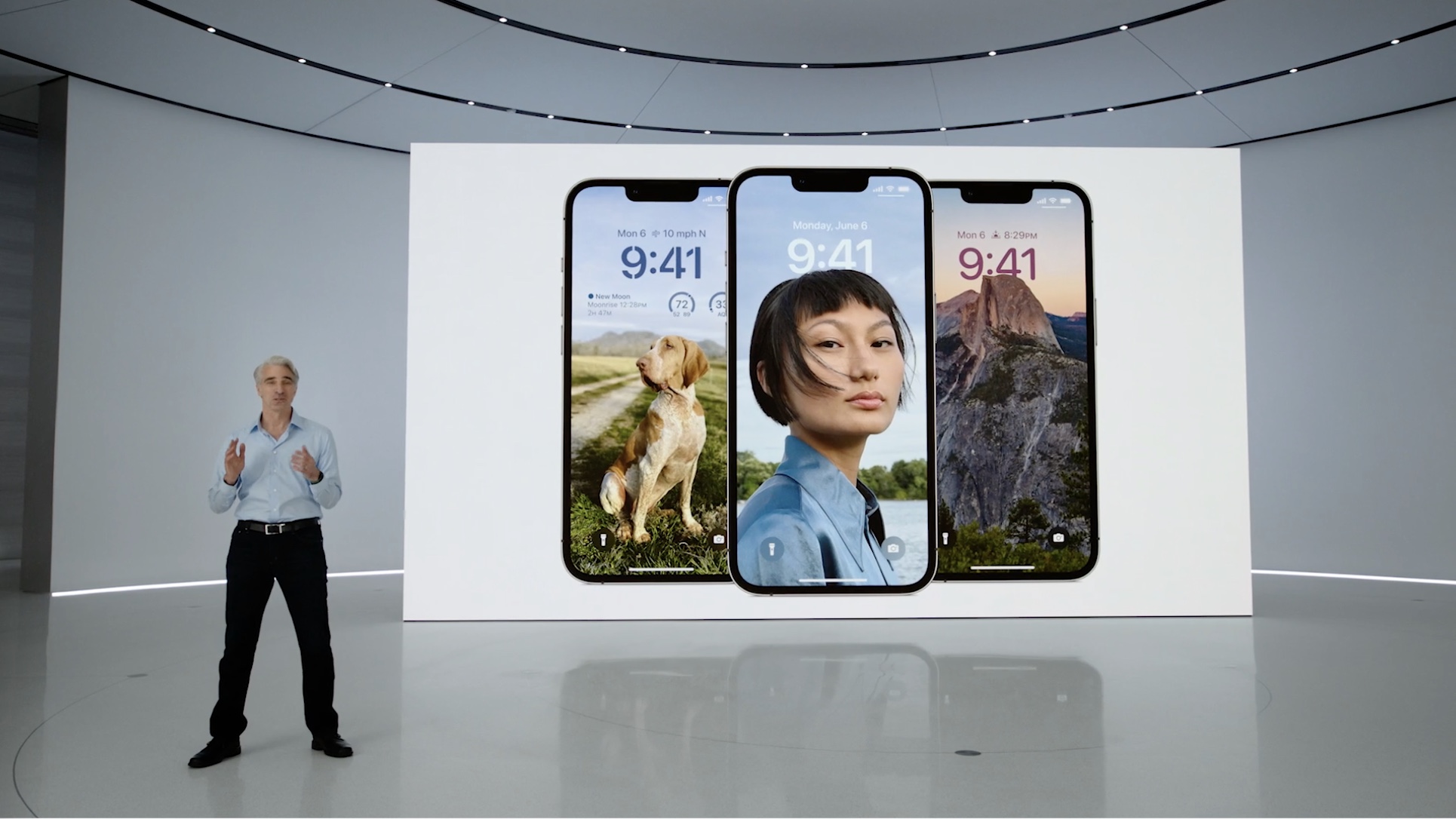 Notifications have also been improved, and now each app can group the notifications it sends to make it easier for users to manage this space. There's also a new API that allows you to be notified of sports events in real time.

In iOS 16, Apple will allow you to delete messages you don't want to send. This app will receive a new "Undo Send" feature, as well as the ability to edit messages that users have sent and have not yet read.

Apple also revealed that it's updating dictation, which will make it easier to send messages on the go. With the update, Dictation automatically adds punctuation to longer messages, and you can even add relevant emoji characters. 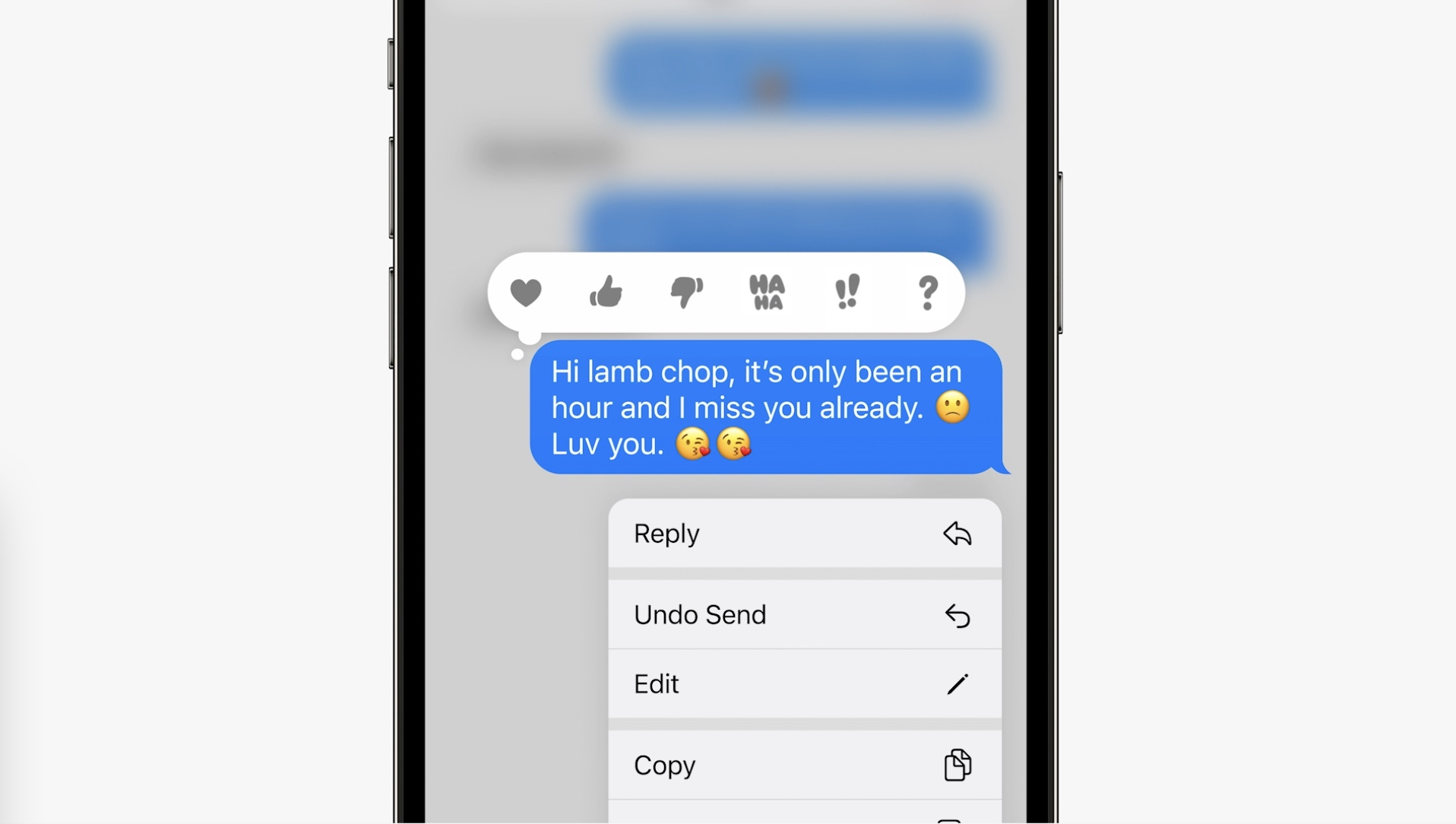 Apple has also improved its Apple Pay payment service. With this novelty, Apple allows users to split the cost of purchases into four equal payments over six weeks, with no interest and no fees.

It was also announced yesterday that the Maps app will receive several important updates. It will cover more countries and allow users to set up multiple stops for the route they are creating. 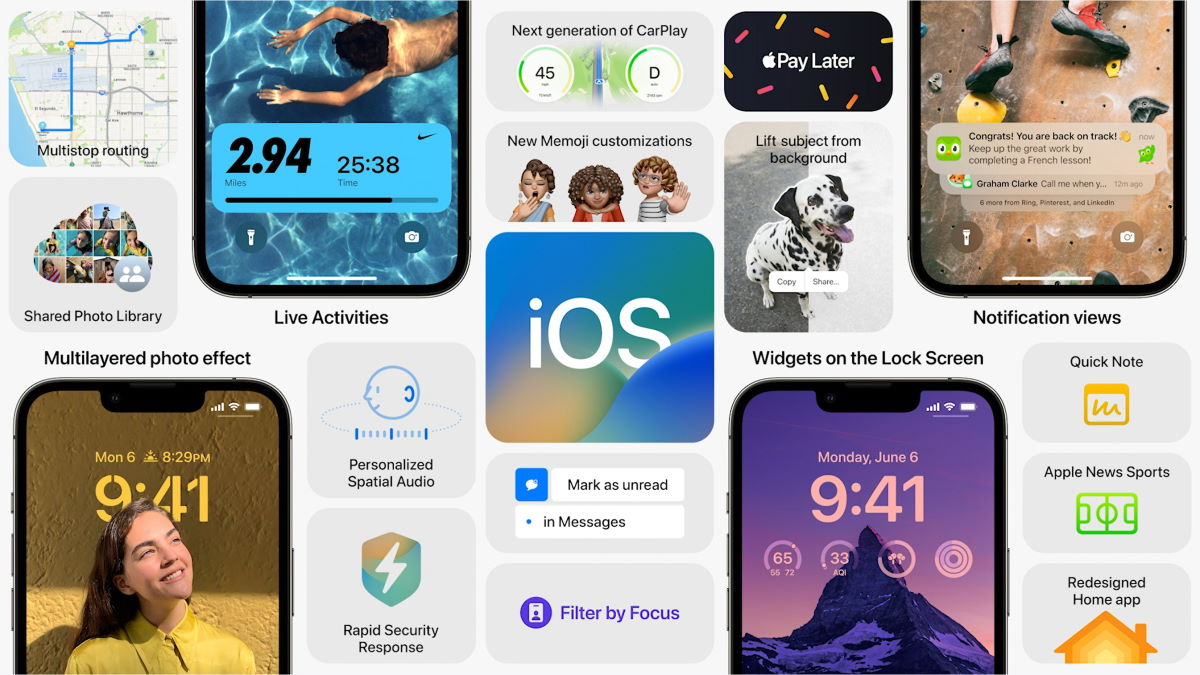 In iCloud, Apple will allow sharing of albums, just like Google Photos, so that users can more easily sync albums with friends and family.

iCloud Parental Controls will bring more security to the entire family with Family Sharing. One of the interesting features is that children can request screen time requests through a message, and this authorization is given in real-time.

The second news of the day came from watchOS9. Apple first showed the news that the system is dedicated to the Apple Watch, showing 4 new watch faces, new themes and the possibility to provide users with direct and interesting shortcuts.

On the other hand, since this is a device dedicated to exercise, Apple has shown improvements in running. This provides more information for those who play the sport, better support for athletes, and a greater commitment to this approach. 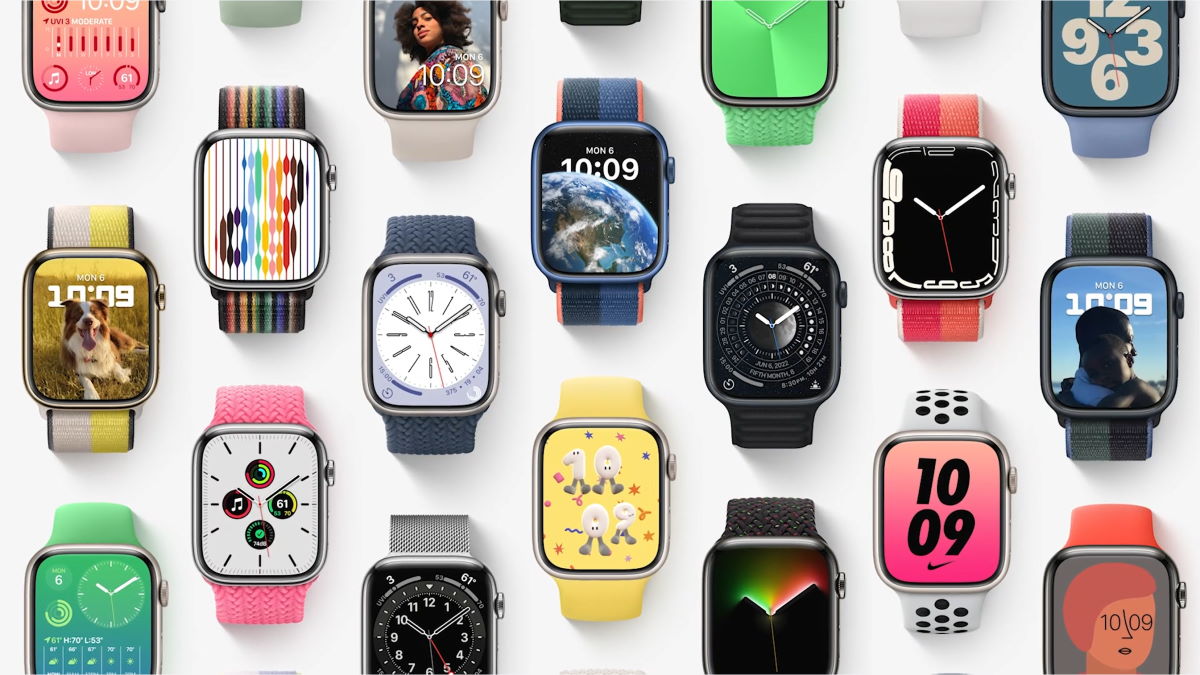 On the health front, Apple also has news in watchOS 9. This area has been strengthened and is now monitoring the medication being taken. Apple Watch will be able to alert users to their intake. These will also receive alerts about dangerous mixtures that can be made with the drug.

Security continues to play a big role here, with Apple now guaranteeing that all information lives only on the user's watch, and that information transmitted will always be protected and not shared with anyone. 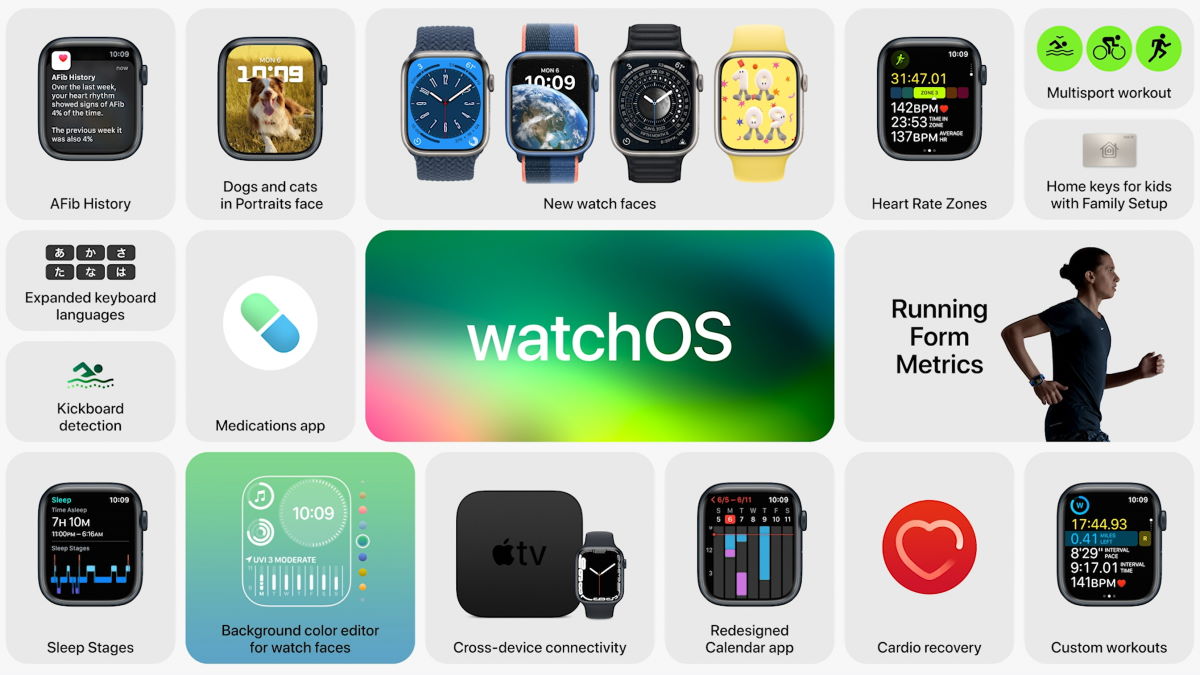 Apple's big news at the event was the arrival of a new SoC dedicated to portable computers. Apple's SoC M2 promises to be even more powerful, with above-average performance.

The M2 supports up to 24GB of unified memory and twice the memory bandwidth (1000GB/s). The M2 has 8 cores (4 high performance, 4 high efficiency). Apple claims an 18% increase in multi-threaded performance. Compared to M1, M2 offers 25% faster GPU performance at the same power level and 35% faster at full power. 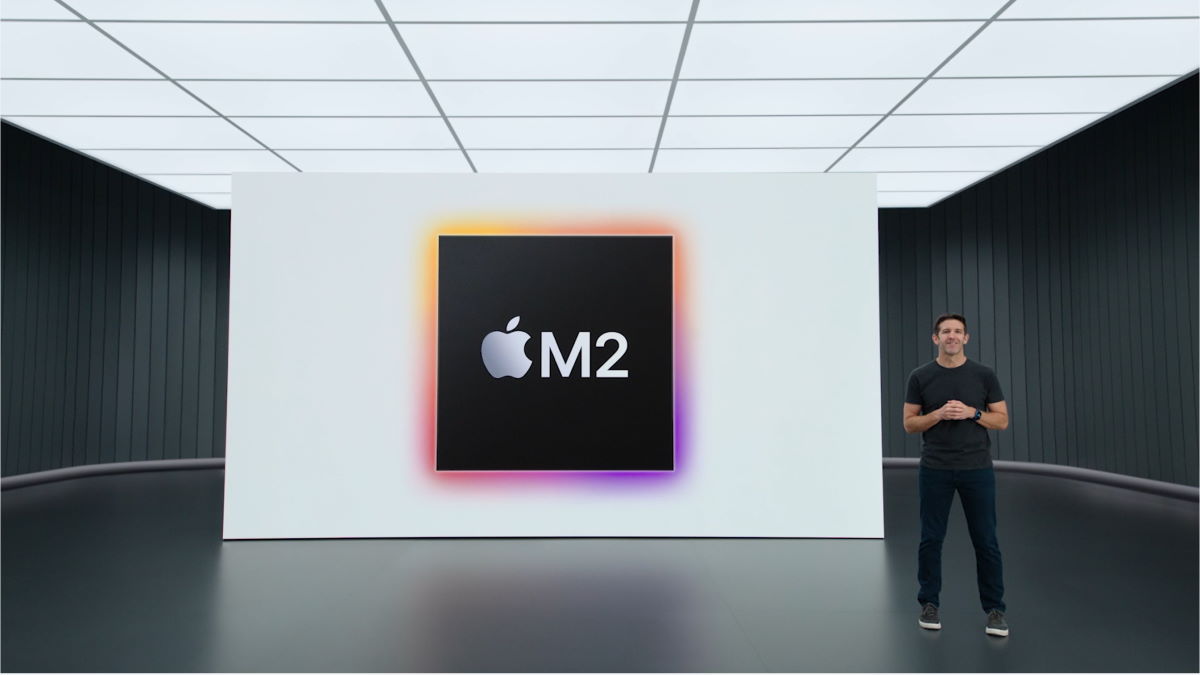 To make that proposition come true, Apple introduced the new Macbook Air with a 13.6-inch Retina display. That includes MagSafe. It also comes with two Thunderbolt ports and an audio jack. The new Air has a small "notch" where the webcam is. Apple says its 1080p resolution is twice that of the previous camera, and the low-light performance is twice that of the previous camera.

It is also worth noting that it is equipped with Wi-Fi 6 and has autonomy that can reach 8 pm. 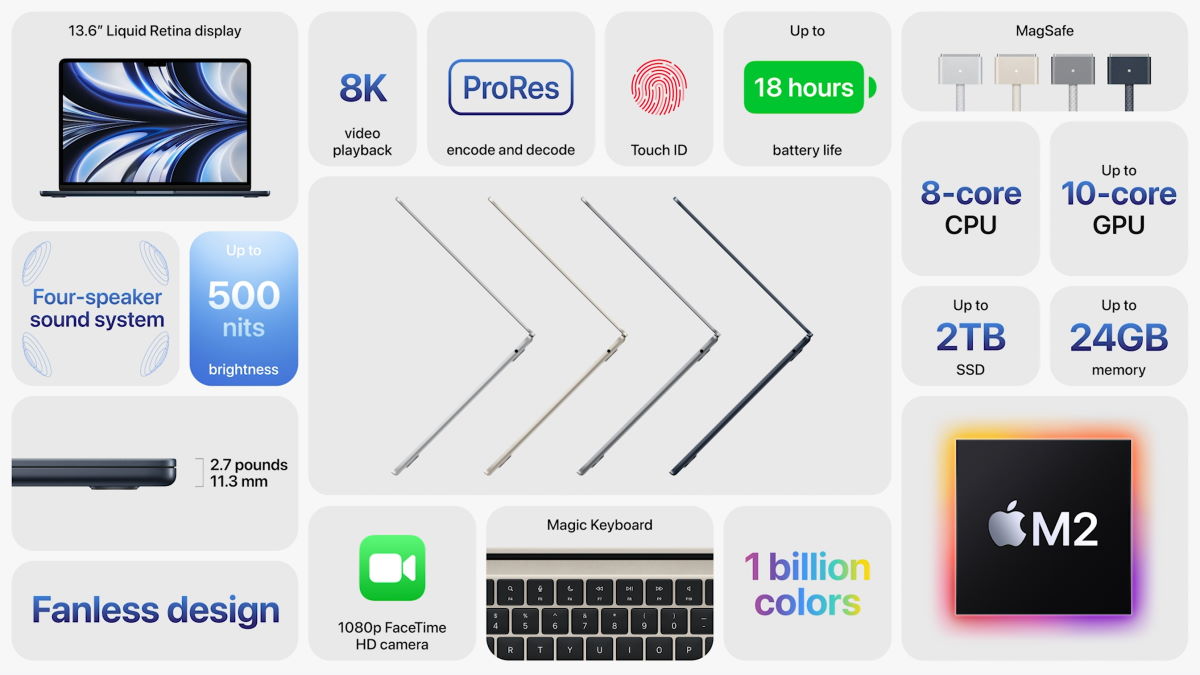 The MacBook Pro also received this SoC and boosted its performance in a very noticeable way. Compared to models with previous SoCs, Apple saw a 39 percent gain in both graphics and gaming.

Also in the energy sector, the SoC M2 manages to increase efficiency and improvements can easily be seen at work or at leisure. Apple promises 20 hours of battery life for the new MacBook Pro. 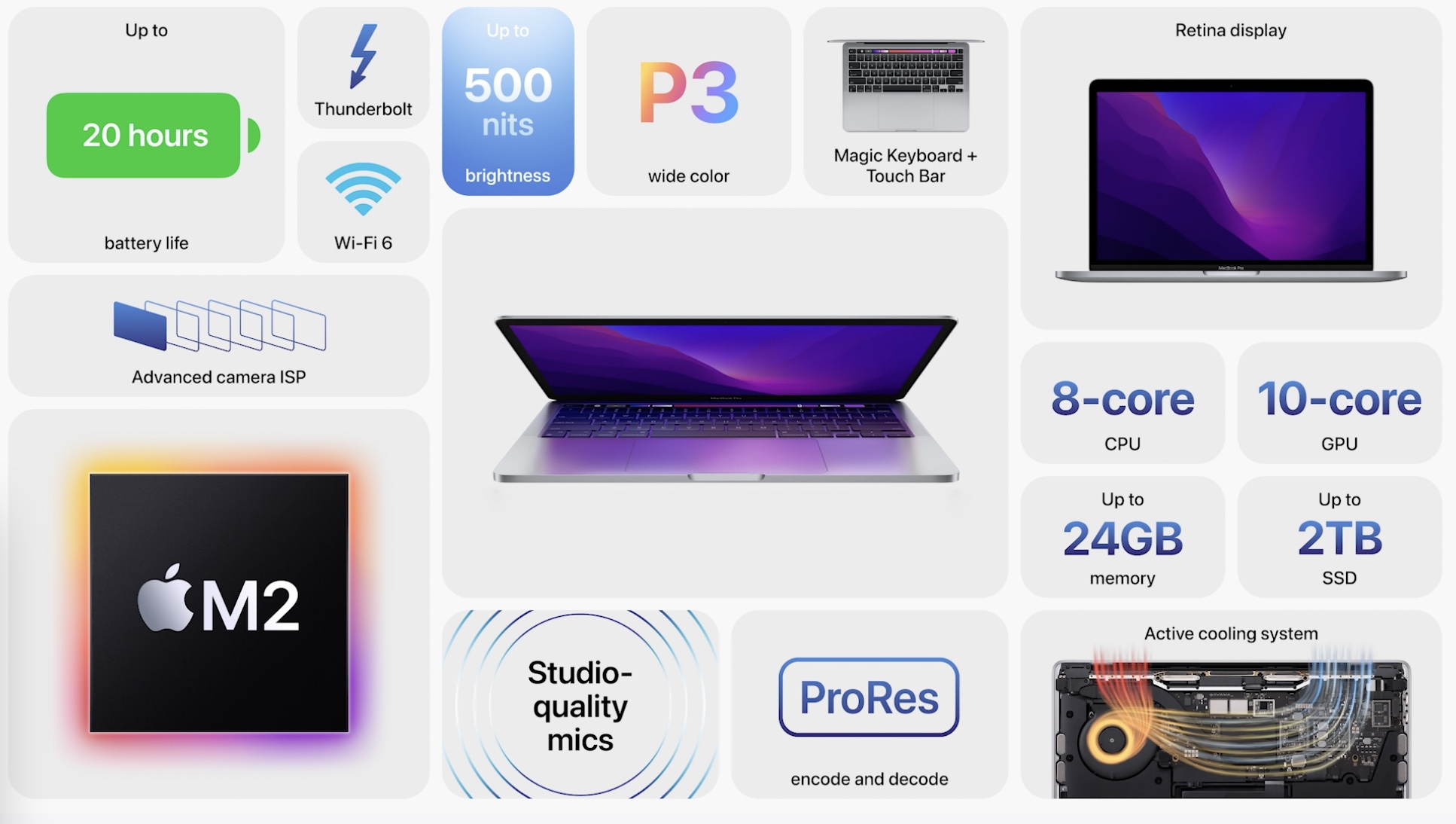 Both models will be available in July, with the MacBook Air priced at $1,199, which is $200 more than the previous version. The MacBook Pro is priced at $1,299, with a discounted price of $1,199 in the education segment.

The MacBook Pro 13 will also get Apple's new SoC M2

Otherwise, Apple has also introduced a new macOS. Under the name Ventura, it managed to get more out of this system by pioneering a new interface more focused on multitasking and the organization of user work.

The first big news is even the stage manager. It can quickly group all windows of all applications and arrange them according to their origin. In this way, the desktop and the user's focus are easily and quickly accessed. 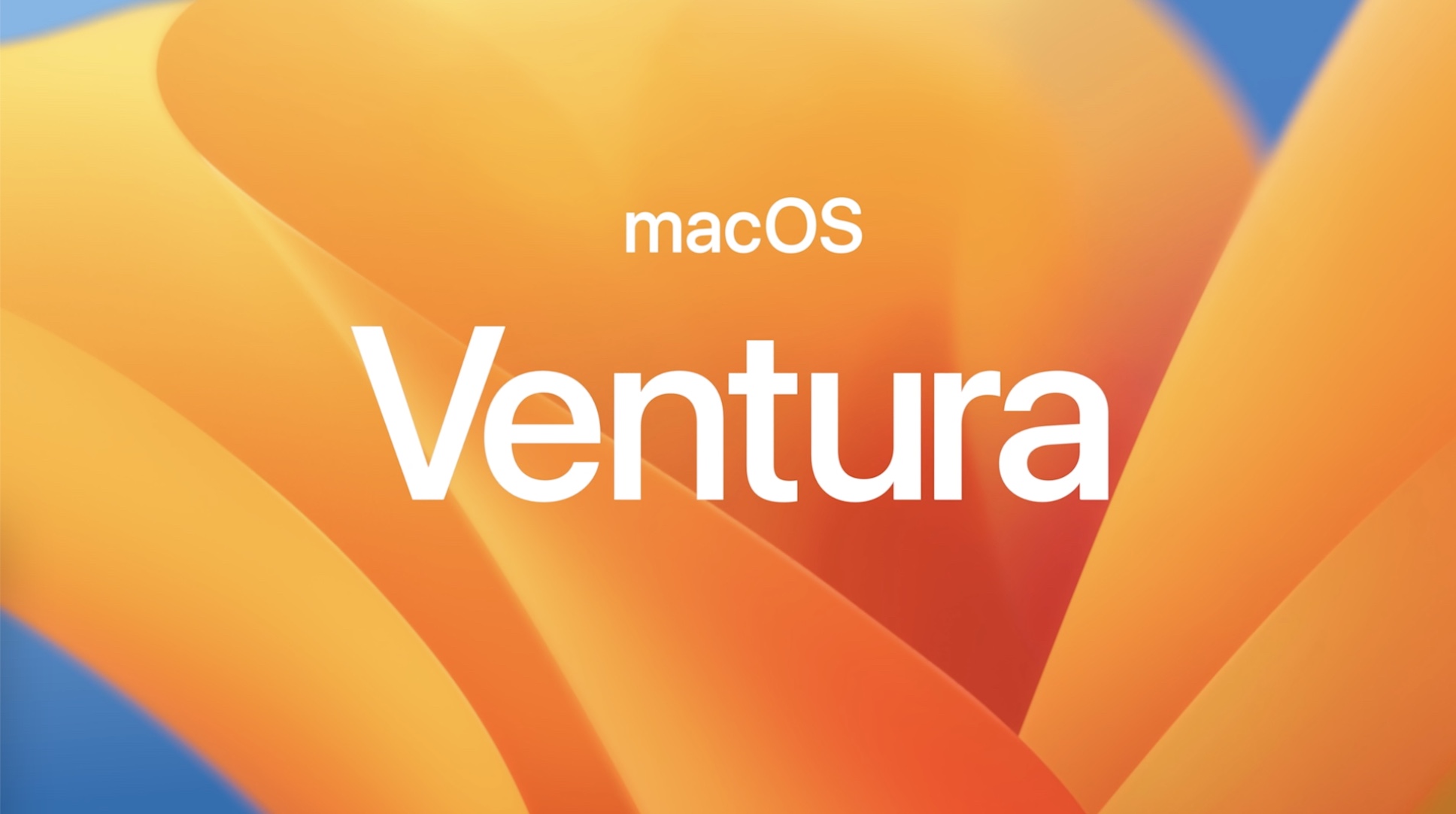 Spotlight has also been enhanced, and now there are more. First, it lets you create more content in the top bar more directly. From here, they can create tasks, access shortcuts, and more. Of course, searches have also increased, making it easier and faster to find.

In the email app, users will also receive improvements such as unsending messages and scheduling appointments. For the Messages app, just like in iOS, you can edit sent messages and even unsend them. 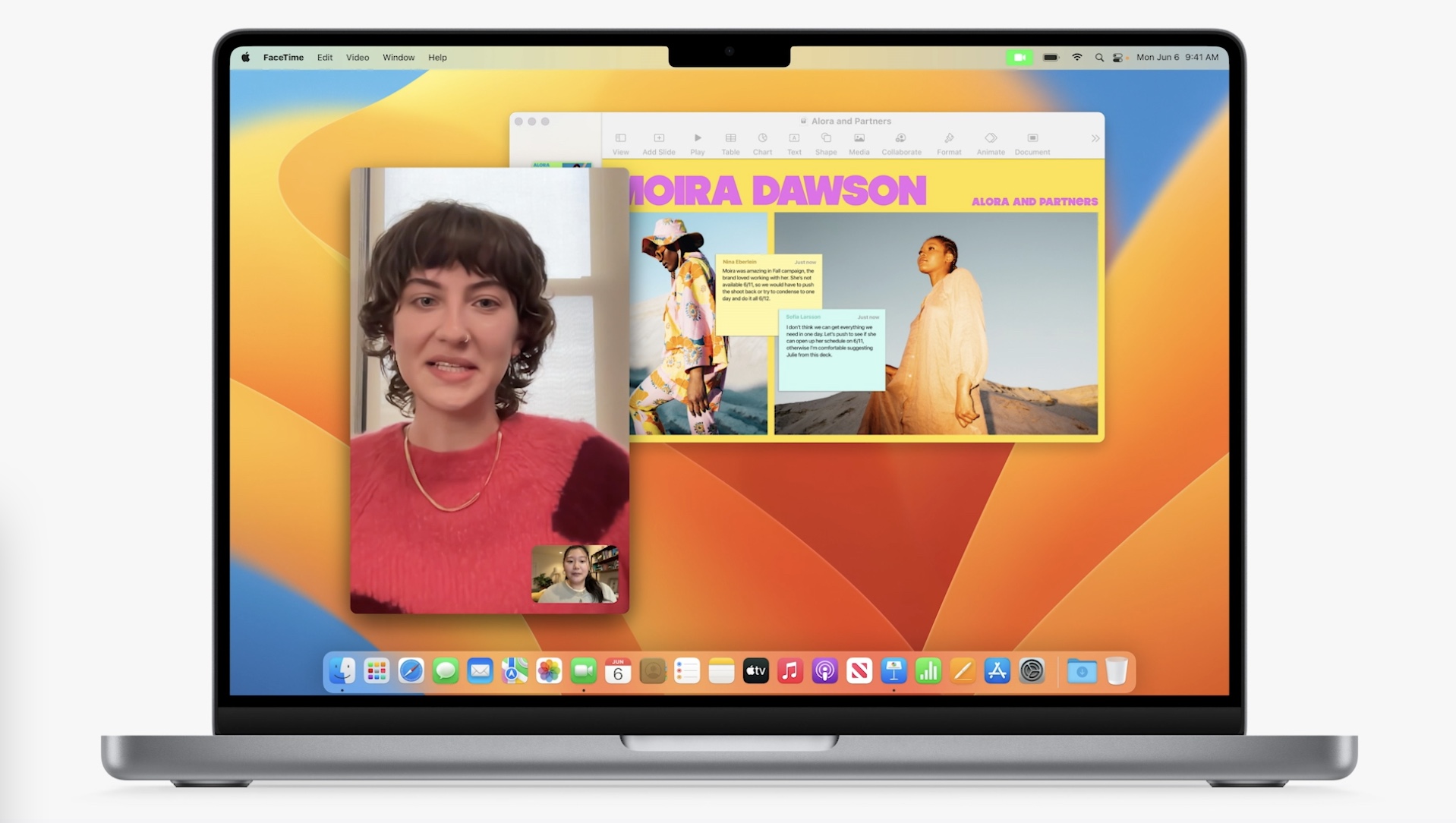 Safari has improved on many levels and is now the fastest browser on the planet and the most efficient browser available on a Mac. Sharing tabs make browsing the Internet easier and help you organize these elements in groups.

In the realm of passwords, with access keys, everything becomes more secure. This is a new login method with end-to-end encryption to prevent phishing and information leakage. 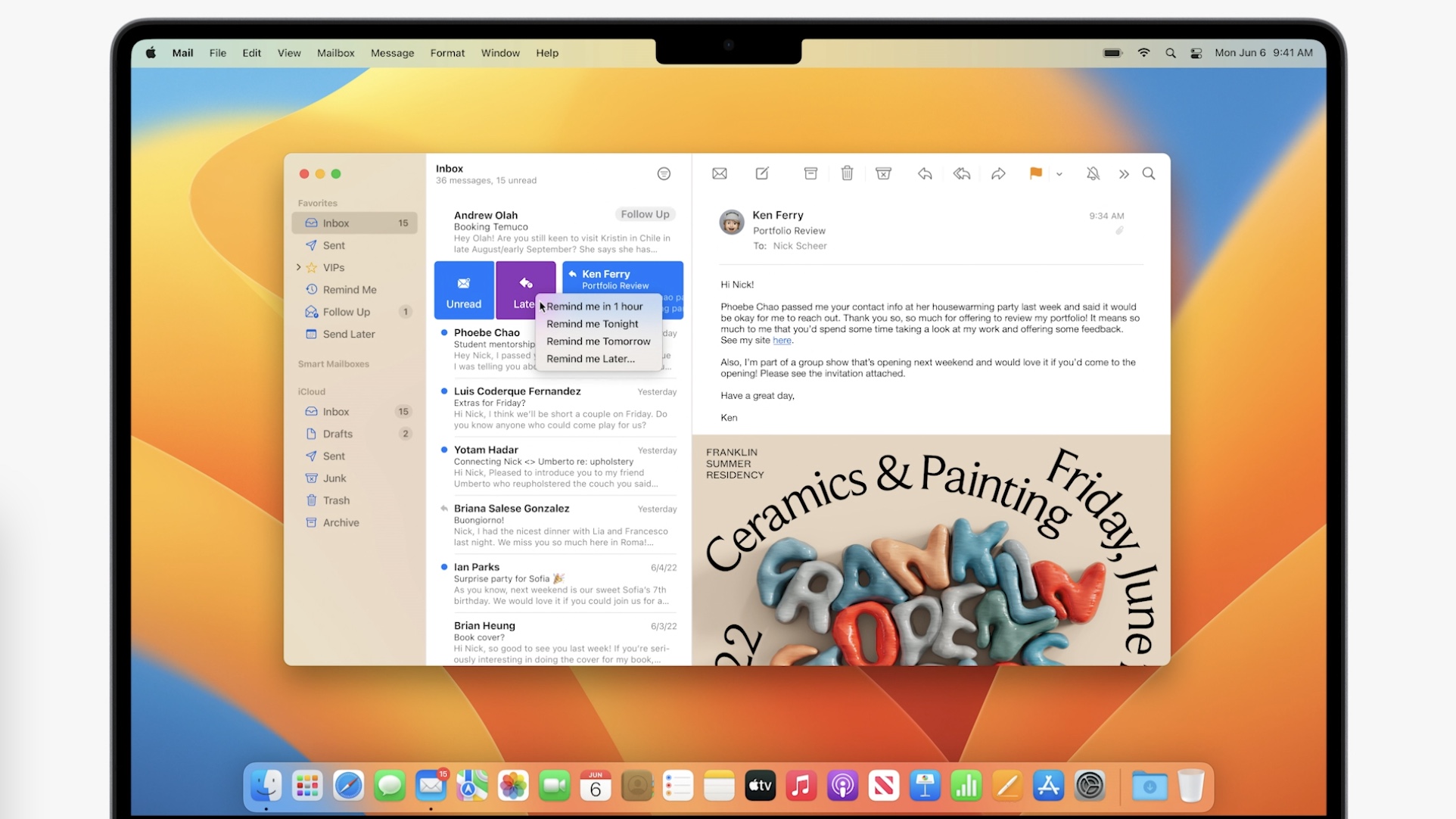 Another point that gets a lot of improvements is the video-related part. In addition to the handover of Facetime calls, macOS Ventura also brings a new presentation mode that allows the user and his secretary to be on the same plane for a larger, more dedicated area.

Center stage accompanies users wherever they move, along with improvements to automatic lighting that make video and calls even better. Everything can be done in simple file sharing. 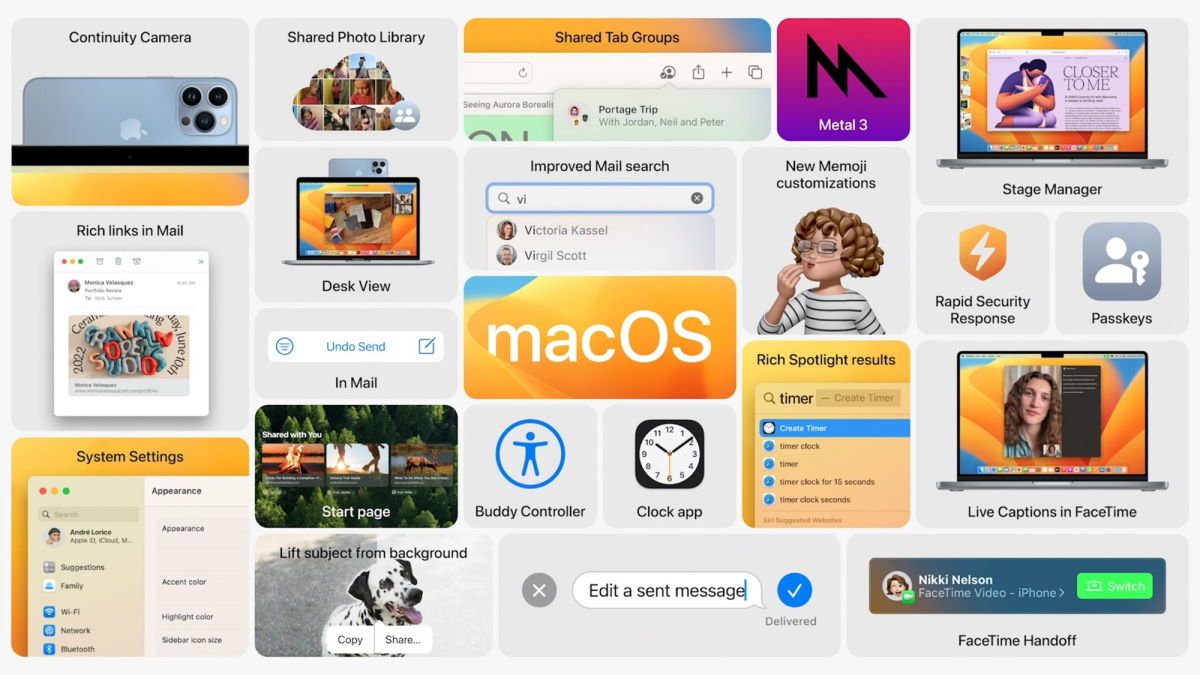 The first beta of macOS Ventura is out now, with a public trial expected to be available to all users next month.

iPadOS 16 is a step toward Apple's new tablet

The WWDC 2022 keynote concluded with a showcase of iPadOS 16. Although it's a system designed specifically for Apple's most successful tablet, it's getting closer and closer to what we have on macOS.

iPadOS will allow you to have overlapping windows for the first time. Additionally, this new version of iPadOS bets on a set of collaborative features to make the iPad even better. You can easily share documents, through messages, you can access Facetime directly through documents, etc. 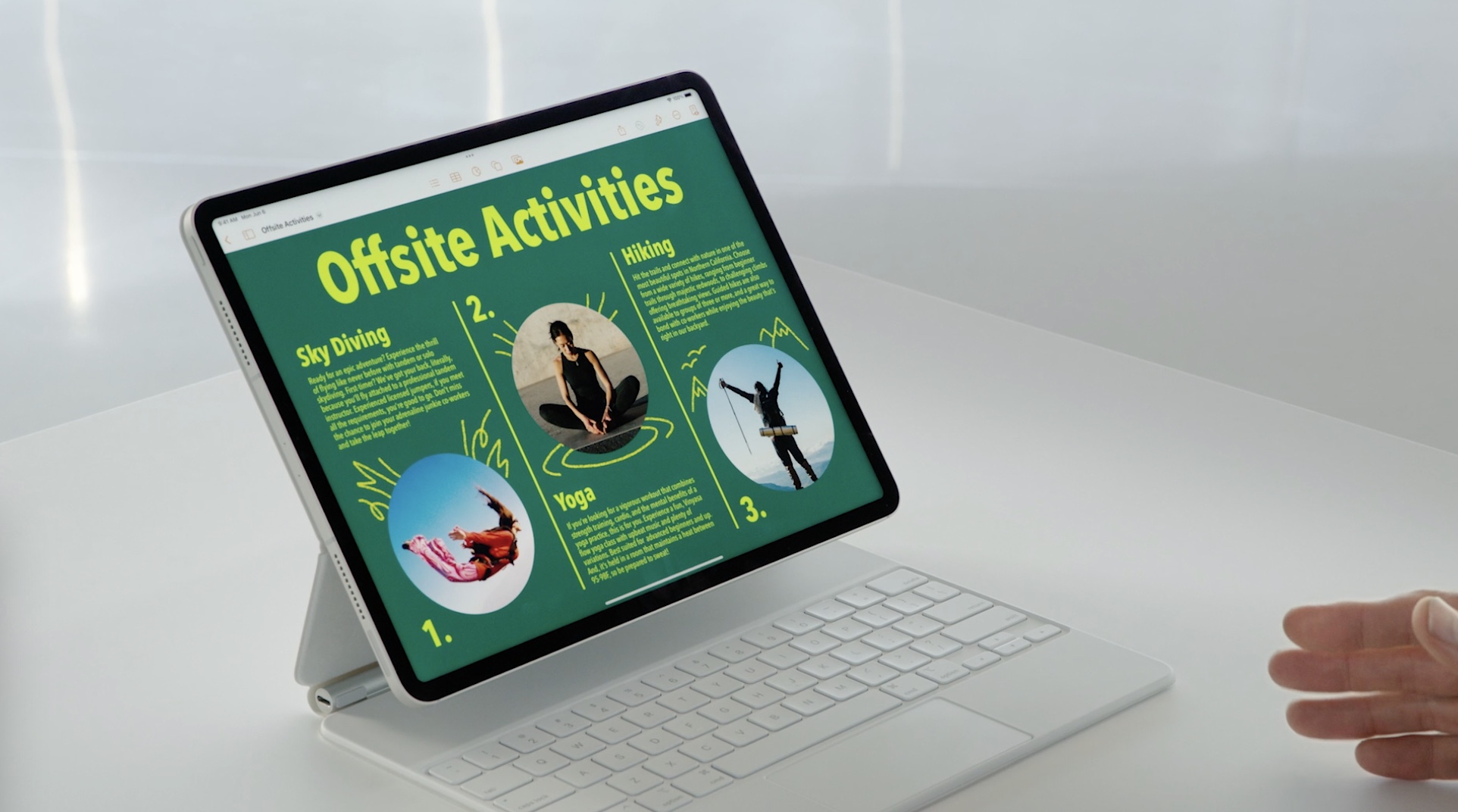 Coming soon to iPhone, iPad and Mac, FreeForm is a new feature where collaboration will work in a complete and integrated way. Additionally, the Weather app for iPadOS is finally here, which has been expected since the launch of the first iPad.

Game Center will also get some SharePlay functionality. For example, users will be able to play multiplayer games while maintaining a FaceTime call. 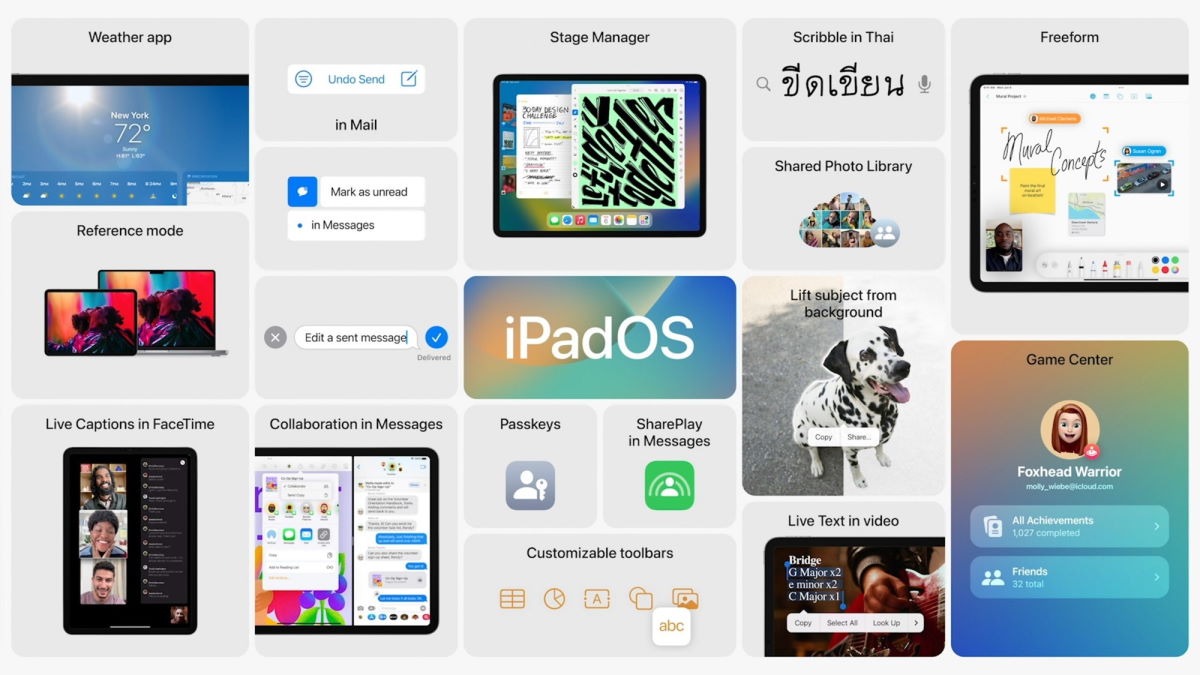 The update also includes a handy quick note feature, a controversial Safari redesign (which is finally rolled back), a new set of widgets, and many other goodies.

The developer beta is available now, and the first public access beta will be available in July.

The new iPadOS 16 has arrived and brings amazing novelties

These are the big news for Apple in the coming months. The company will now provide these new versions to programmers and correct any issues that may arise in the meantime. In a few months, they will be ready and accessible, and all the improvements have arrived.